Jordan | 1945 Electrical failure during snowfall, 81% of which were repaired 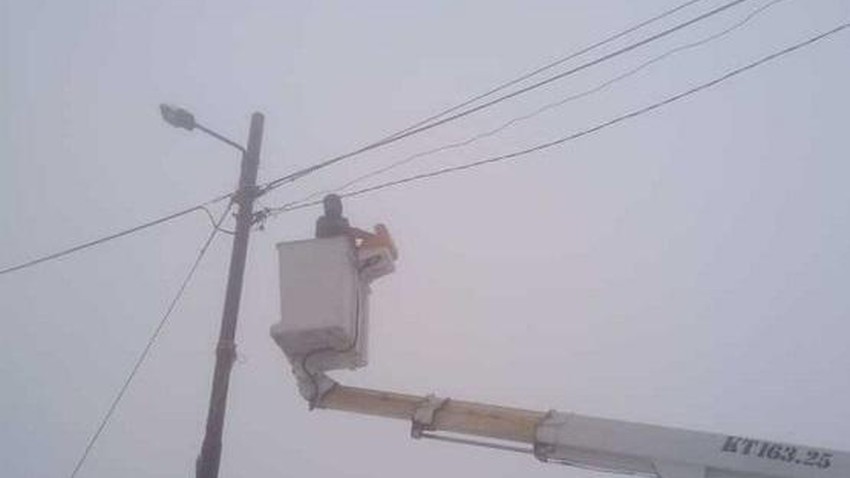 Arab Weather - Chairman of the Board of Commissioners of the Energy and Minerals Regulatory Authority, Dr. Hussein al-Laboun, said in a press statement today, Thursday, that the authority has instructed the authorities working in the electricity sector and oil and gas derivatives since last Monday morning to intensify efforts and raise the maximum readiness to confront the air depression and its repercussions on the electrical system and supply service citizens.

The authority's cadres also carried out extensive field inspection tours of fuel stations and gas depots in various regions of the Kingdom, and the availability of oil derivatives of all kinds was verified.

Dr. Laboun added that the snowy depression raised the loads to unprecedented levels, as the maximum load of the electrical system reached 3810 MW yesterday at 17:34, while the highest load was recorded during the past week on 19/1, reaching 4010 MW at 17:25, which is the highest in the history of The kingdom.

Regarding the total faults in the electrical current during the 24 hours since yesterday morning, he said that they amounted to 1,946 faults in various regions of the Kingdom, of which 1,580 have been treated, with a completion rate of approximately 81%, while the rest of the faults are being addressed.

And in the areas of the Electricity Distribution Company responsible for the regions of the south, the Jordan Valley and the east of the Kingdom, it dealt with 96 faults, 85 of which were dealt with at a rate of 88.5 percent, while the monitoring and emergency center in the authority is currently being followed up with the electricity companies to restore the current to the remaining outages as quickly as possible.

Laboun confirmed the availability of oil and gas derivatives, explaining that the number of gas cylinders that were ordered from the beginning of the depression yesterday morning until this morning in various regions of the Kingdom amounted to about 340,000 cylinders, which is higher than the rate required in emergency cases.

The authority, according to Al-Laboun, is following up coordination between sector companies and official bodies to access closed areas due to the prevailing weather conditions, and it monitors its performance to verify the extent of commitment to providing the service.

He said, that the control and emergency center in the authority continues to receive complaints from citizens and follow them up with the concerned authorities, and the center has been reinforced with delegates from the electricity companies throughout the period of the depression and around the clock to follow up on complaints and provide the authority with periodic reports in this regard.

Laboun stressed the necessity of the commitment of the electricity companies, the Jordan Petroleum Refinery Company, marketing companies, owners of gas stations and gas distributors to implement emergency plans to deal with the atmospheric depression, ensure the sustainability of the electric current and the speed of response to citizens' communications and meet their needs of oil derivatives and gas cylinders in all regions of the Kingdom.

He praised the citizens' cooperation and their observance of the prevailing weather conditions. He called on citizens to report any power outage or shortage of oil and gas derivatives to the emergency numbers: