Jordan | A cold, highly effective and fast air front crossing the Kingdom in the late hours of Friday morning accompanied by rain, hail and temporary snow showers over the peaks of the high mountain heights 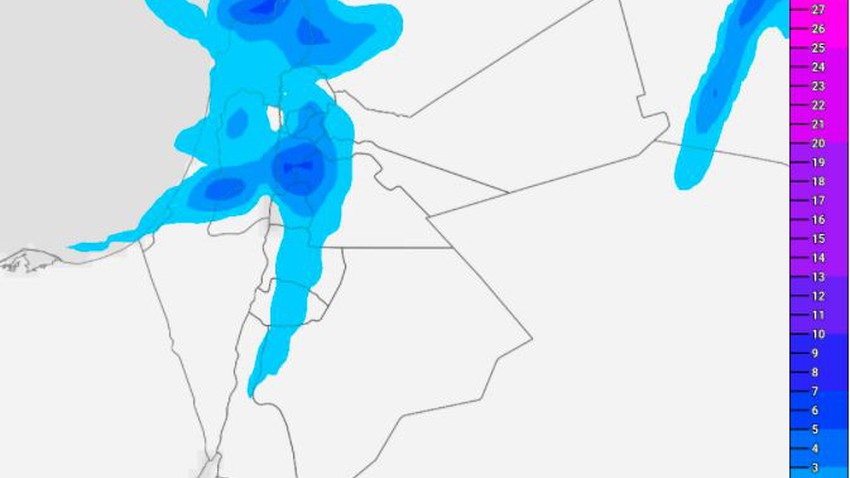 Arab Weather - a cold, highly effective and fast air front crossing the Kingdom in the late hours of Friday morning accompanied by rain, hail and temporary snow showers over the peaks of the high mountain heights

The chances of rain fall on Thursday evening, but very cold winds are expected to flow into the kingdom

There is a further drop in temperatures this evening and the weather is generally cold in many regions, and very cold over the high mountain heights and some regions of the Badia and the eastern plains, frosts are expected to form in several parts of the Kingdom, with fewer opportunities for rain, and the winds are light and volatile It activates after midnight.

The Kingdom is affected on Friday by an air depression classified as a second-class depression, which will center over Syria and be associated with a very cold and polar air mass and cross the Kingdom with the late morning hours a very cold and highly effective air front

Where there is a significant drop in temperatures, and they become less than their usual rates for this time of year by about 5-7 degrees Celsius, and the weather in the morning hours is very cold with strong winds blowing in most regions, and the crossing of a very cold and high air front gradually begins Effective and that is with the late morning hours, so that the weather gradually turns into stormy and cloudy with heavy rains in the north and center of the Kingdom, accompanied by the occurrence of thunder and showers of hail that may be dense and accumulated at times in some areas, and showers of snow are expected. While crossing this cold front over high mountain heights for a temporary period.

And after crossing the air front (in the afternoon hours) the weather remains cold in several areas and very cold over the high mountain heights and fluctuates between often cloudy and cloudy with rain, God willing, at intervals in the north and center of the kingdom and the northern parts of the southern regions , In the form of snow showers over the heights of Tafila Mountains (Rashadiyah and Qadisiyah).

Arab Weather recommendations to deal with the next depression:

On Friday evening, the weather continues to be cold in most regions, very cold over the high mountain heights, and cloudy in the north and center of the country with rain, God willing, from time to time. Clouds that are in contact with the surface of the earth will pass, causing fog to form over the mountain heights. The winds are moderate in westerly speed, activating sometimes.