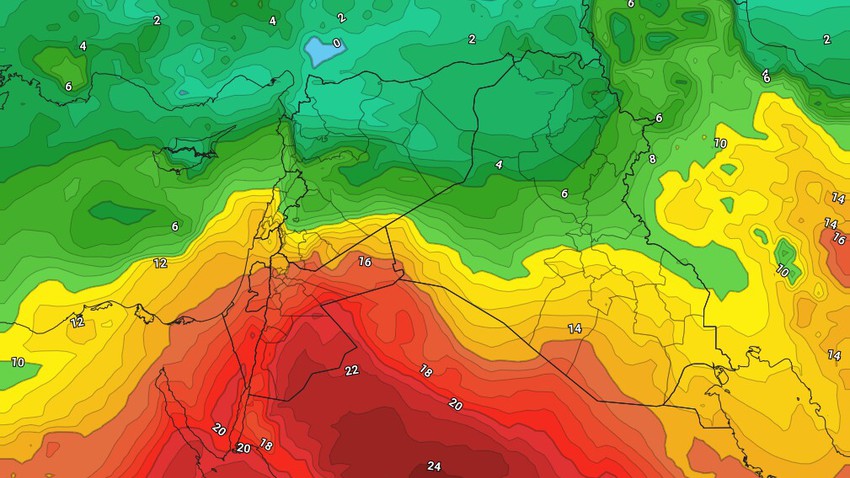 Weather of Arabia - The latest outputs of the numerical models indicate that the Kingdom was affected by a deep pentagonal air depression centered to the north of Egypt on Sunday.Details

It is expected, God willing, that the Khamasini depression will be concentrated on Sunday to the north of the Egyptian coasts, pushing warm and dry winds towards the Kingdom, causing a significant rise in temperatures on Sunday to be higher than their rates for this time of the year, and temperatures will be in the twenties in most major Jordanian cities and the capital Amman , while it is in the thirtieth levels for the first time this year in the areas of the Jordan Valley, the Dead Sea and the city of Aqaba, in addition to parts of the Eastern Badia.

The weather is warm in various regions, and relatively hot in the Badia, Jordan Valley, Dead Sea and Aqaba regions.

Chance of sleet of rain

It is expected, God willing, that clouds will appear at medium and high altitudes, due to which there is a possibility of local muddy showers of rain in some areas, which may be thunderstorms over some parts.

The Khamsini depression is accompanied by active southeasterly to southwesterly winds as a result of its deepening over the waters of the Mediterranean Sea. The active winds are accompanied by strong gusts that touch at 100 km/hour on the desert and open areas, working to renew the formation of dust waves in those areas, while the weather is dusty in varying proportions. In the rest of the Kingdom as a result of the wind coming from desert areas.

An accelerated drop in temperatures on Sunday/Monday night

The Khamasini depression moves east towards northern Saudi Arabia, and the Kingdom is affected on Sunday/Monday night by rushing western air currents behind the Khamsiny depression, so temperatures drop sharply and rapidly and the weather becomes humid and cold in all regions of the Kingdom with moderate-speed westerly winds, sometimes active and accompanied by gifts Strong on the southern heights so that the weather remains dusty in varying proportions.

There is a significant decrease in temperatures on Monday to be lower than their averages for this time of the year, and the weather will be cold in most areas, and pleasant in the Jordan Valley, the Dead Sea and the city of Aqaba with the appearance of clouds at different altitudes.