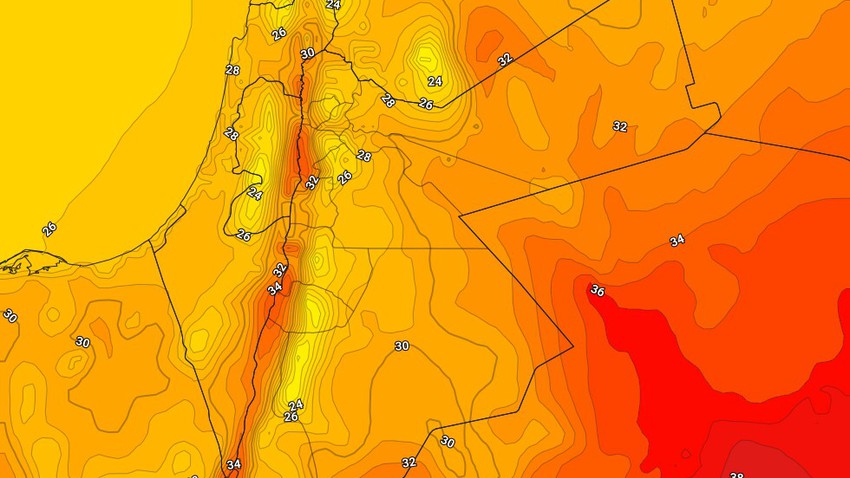 Weather of Arabia - It is expected, God willing, that there will be a decrease in temperatures to become lower than their rates for this time of the year, and mild summer weather prevails in all regions of the Kingdom, relatively hot to hot in the Jordan Valley, the Dead Sea and the city of Aqaba.

Low clouds and medium clouds are spread, especially in the northern and central regions, and as a result there is a weak possibility of local showers of rain in limited parts of the far north of the Kingdom.

The winds are northwesterly moderate in speed, sometimes active in all regions, leading to dust, especially in desert areas.

Night temperatures drop and alert of dense fog in these areas

There is a significant decrease in night temperatures compared to the previous nights, and the weather is relatively cold in most regions of the Kingdom, especially in the mountains and plains, while it is colder in the peaks of the Shara Mountains, which calls for wearing a light coat while leaving the house when the night hours are late.

Surface humidity levels rise significantly, and large amounts of low clouds appear in all regions of the Kingdom.

Fog is formed in the northern, central or even southern mountain heights, and perhaps parts of the eastern plains. It is not excluded that the fog will sometimes be dense over some areas, especially in the late night hours and early morning, so please be aware of the low horizontal visibility due to fog.