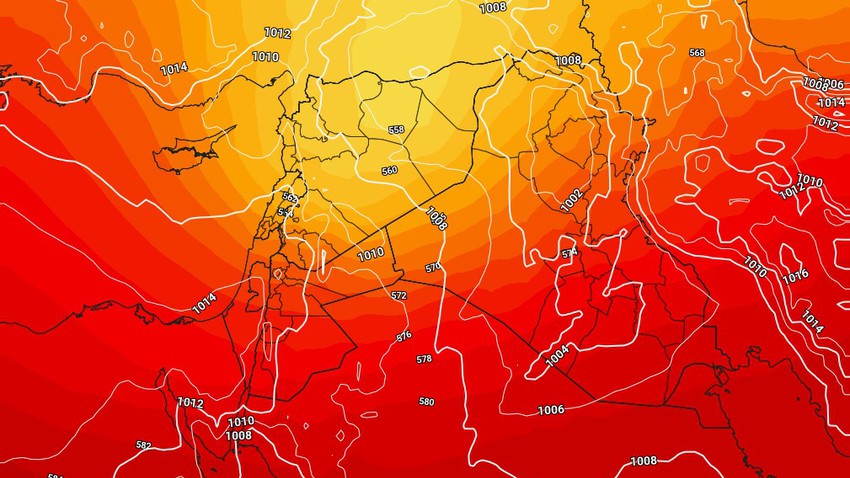 Arab Weather - The outputs of the weather maps at the Arab Weather Center indicate a rush of southwestern air currents that raise temperatures during the morning hours of Friday, and the weather is warm in most regions of the Kingdom and relatively hot in the Jordan Valley and Aqaba, but with the afternoon and afternoon hours the air currents become Coming from the Mediterranean Sea, so there is a gradual decrease in temperatures in all western regions to be slightly higher than their rates for this time of the year. and high.

Temperatures will return to normal on Saturday

It is expected, God willing, that there will be a further decrease in temperatures during the day on Saturday in all regions of the Kingdom, to be around slightly higher than their averages for this time of the year, and the weather will be cold in the morning, turning into pleasant and sunny for the rest of the day in many regions of the Kingdom, in When it is relatively hot in the Jordan Valley, the Dead Sea and the city of Aqaba.

On Friday, strong, active southwesterly to westerly winds will gradually blow in the south and east of the Kingdom, with a steady wind speed exceeding 50 km/h, accompanied by strong gusts of touching 80 km/h, which will form strong dust waves in the desert areas, and serious warnings of low or low risk. Lack of horizontal visibility, especially on Friday afternoon and afternoon.

On Saturday, the strong winds recede, and become light to moderate in speed in general, sometimes active over some areas.

A clear drop in night temperatures occurs from Friday/Saturday night, and the weather becomes relatively cold to cold in most regions of the Kingdom during the late night hours. Cold nights for this time of the year are normal, unlike the weather that the Kingdom experienced in previous days.

While the weather is moderate in the Jordan Valley, the Dead Sea and the city of Aqaba, and temperatures are around the twenties Celsius in those areas.