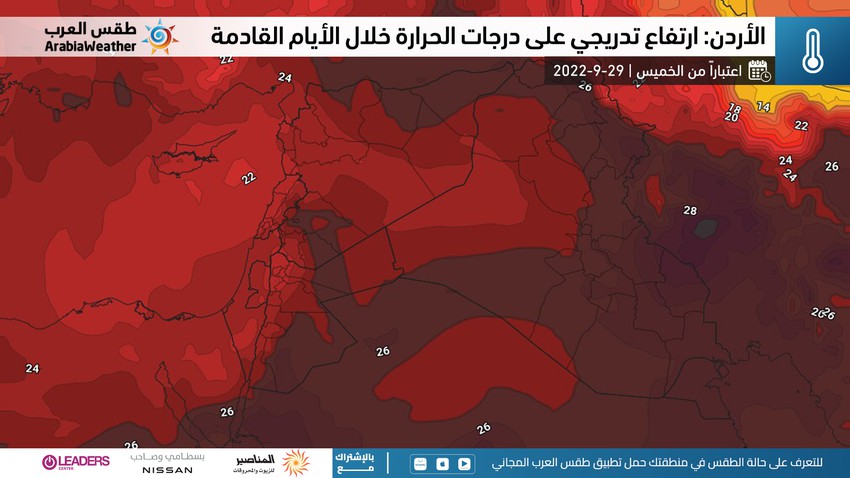 Arab weather - The Kingdom and the rest of the eastern basin region of the Mediterranean will remain on Thursday under the influence of northwesterly currents with temperatures close to their rates during the remainder of September, and with the weekend, the Kingdom is expected to be affected by relatively hot air currents, after which temperatures will rise to Summer levels, God willing.

In the details, the temperatures rise slightly in the Kingdom on Thursday, and are around their usual rates for this time of the year. The autumn weather is stable, tending to heat in various regions during the afternoon and afternoon hours, while it is relatively hot in the Badia, the Jordan Valley, the Dead Sea and Aqaba regions. The winds are northwesterly moderate in speed, sometimes active, including in the Aqaba region. The activity of the northern winds in Aqaba does not work on wave activity due to the topographical nature of the Gulf, while the southern winds work on that. The Kingdom, in particular, and the region in general will be on a date with a relatively hot air mass on Friday and Saturday, and this mass comes this time as a result of the placement of a cold air mass in western Europe to the Maghreb, which pushes air currents hotter than usual across the Egyptian desert and northern Arabia towards the Levant And the weather becomes closer to summer than to autumn, and the weather is relatively hot in most regions of the Kingdom, and hot in the Badia, the Jordan Valley, the Bahramit, and Aqaba, God willing.