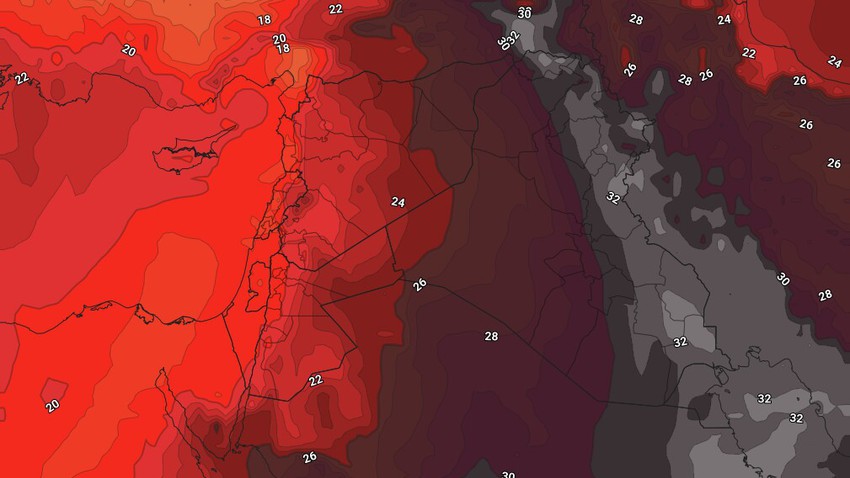 Arab weather - the latest outputs of the numerical models in the Arab Regional Weather Center indicate a slight decrease in temperatures to be slightly lower than their rates for this time of the year on Thursday and Friday, and the weather will be mild summer during noon and afternoon hours in the various mountainous heights of the Kingdom and normal summer In the rest of the regions, while it continues to be hot in the Jordan Valley, the Dead Sea and the city of Aqaba.

The temperatures are between the end of the twenties and the beginning of the thirties Celsius in the main cities, including the capital, Amman, while it exceeds the mid-thirties in the Jordan Valley, Aqaba and desert areas.

Coinciding with the appearance of low clouds, especially in the northern and central western regions.

On Thursday and Friday, moderate-speed northwest winds blow over the Kingdom, active in the afternoon and evening periods, especially in the mountainous and open areas, and are dust-inducing in the desert areas of the Kingdom.

The weather will be pleasant to moderate during the night hours, but it will tend to be a little cold at the late night hours and dawn, especially in the high mountainous heights and the eastern plains, so that the minimum temperatures are around 16 degrees Celsius.

This coincides with an increase in surface humidity, and amounts of low clouds appear, which may lead to the formation of fog in some areas of the mountains.