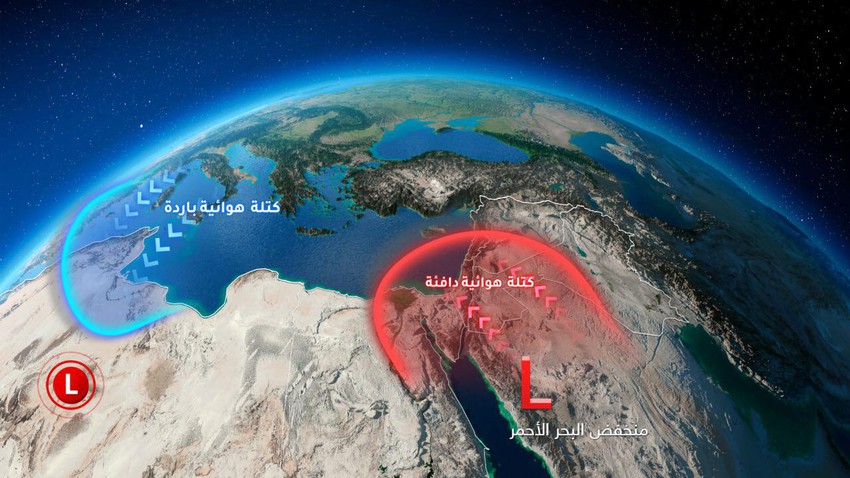 Arab Weather - The weather systems during the first week of Ramadan are represented by a rush of warm air mass towards the Kingdom with temperatures higher than the averages for such time of year, which coincide with the extension of the influence of the Red Sea depression, and as a result, a gradual rise in temperatures occurs, so that it tends The atmosphere is warm, especially in the afternoon hours.

Warm spring weather in the first days of Ramadan

Temperatures are expected to start to rise gradually on Tuesday, so that the spring weather will be mild to moderate in general, and on Wednesday, as a result of a warm air mass rushing towards the Kingdom, warm weather prevails over all regions, in an unusual manner for this time of the year. It is hotter in the Jordan Valley, Dead Sea and Aqaba.

An additional rise in temperatures Thursday

The Kingdom is increasingly affected by the warm air mass as of Thursday, as the temperature rises to approach the 25 ° C barrier in the capital Amman and the Jordanian cities, and at the beginning of the thirties Celsius in the Jordan Valley, the Dead Sea and Aqaba, and the temperatures are higher than their annual rates by about 6-7 degrees Celsius.

The temperature continues to rise on Friday, as this warm mass reaches its peak effect on the Kingdom, where the Great in Amman and Jordanian cities jumps to 27 Celsius, with the emergence of medium and high cloud formations, and the warm weather is accompanied by a dry atmosphere.

It is expected that there will be a decrease in temperatures on Saturday, but it will be temporary, meaning that it will not last for long, as temperatures will rise again from Sunday, and despite this decrease, temperatures remain higher than their general rates, and the weather tends to heat in general in many regions during The afternoon and afternoon hours, and it is hot in the Jordan Valley, Dead Sea and Aqaba regions.

An atmosphere suitable for breakfast and outdoor sessions, starting from Wednesday night

Night temperatures are expected to rise significantly from Wednesday night, when the atmosphere is ideal and suitable for breakfast and outdoor sessions, due to the control of the pleasant and humid weather in most Jordanian cities, especially over the western highlands, while it tends to be cold in the mountains, and with the dawn hours the atmosphere changes In most Jordanian cities it tends to be cold, and therefore it is not suitable for the suhoor outside the home.

The scientific reason for the eruption of this warm mass

The scientific reason is due to the kingdom being affected by the warm air mass after the will of God to the concentration of the Red Sea depression over Saudi Arabia, as a result of which a warm air mass rushes on the surface towards the Kingdom from the Arabian Peninsula, and such masses are associated with the rule of hot weather and dry weather due to their nature, and the Red Sea depression is known It is a low temperature that is active in the spring and autumn seasons due to the thermal difference between land and water.