Jordan | A moderately hot and humid autumn air mass rushes towards the Kingdom, causing a clear drop in temperatures, starting from Saturday 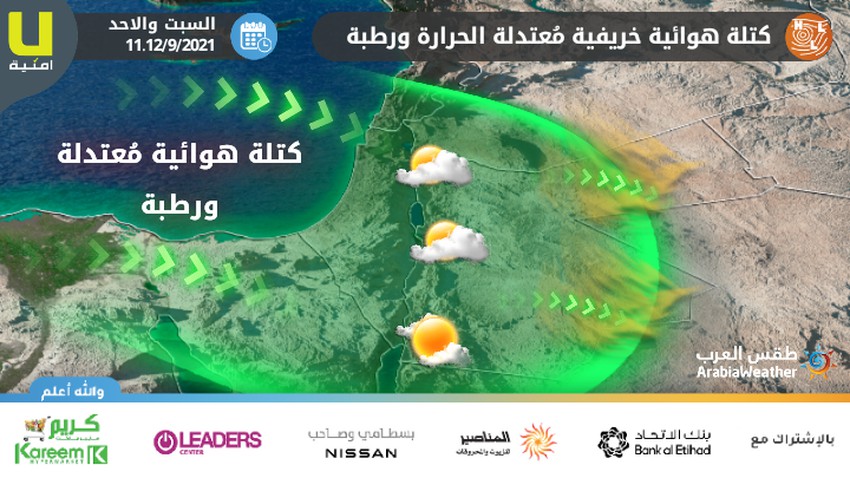 Arab Weather - The latest output of the numerical models processed in the Air Operations Department of the Arab Weather Company indicates that a moderately hot autumn air mass approaches the Kingdom on Friday, so there is a drop in temperatures to be lower than their rates for this time of the year, and the weather is moderate above the highlands. Mountainous, hot in the Jordan Valley, the Dead Sea and the city of Aqaba, in addition to parts of the Badia.

And gradually appear quantities of low clouds, and some medium clouds, with a "weak possibility" of local showers of rain in limited parts of the northern and central regions of the Kingdom.

A moderate and humid autumn air mass will affect the Kingdom, starting from Saturday

It is expected, God willing, that a moderately hot and humid autumn air mass will rush towards the Kingdom from the eastern Mediterranean towards the region, so that there will be a clear drop in temperatures to be lower than their rates, and the effect of the moderate air mass will deepen on Sunday and there will be a further decrease in temperatures On Saturday and Sunday, the weather turns moderate over all regions of the Kingdom, relatively hot in the Jordan Valley, the Dead Sea and the city of Aqaba, in addition to parts of the Badia.

Amounts of low clouds appear, especially in the northern regions, so that the weather will be partly cloudy in some areas and periods. 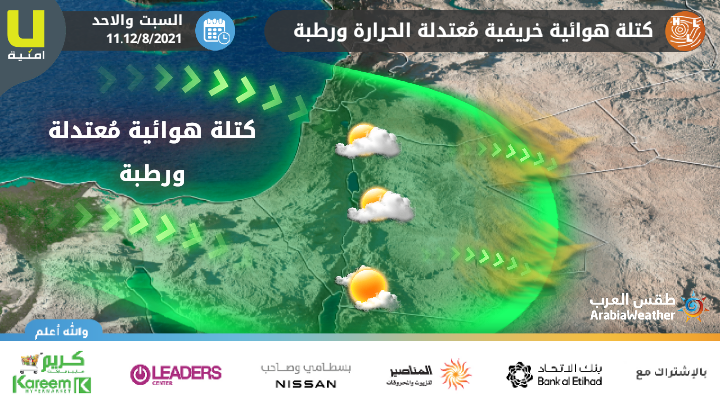 Relatively cold and foggy nights in the mountains and eastern plains, starting from Saturday/Sunday night

Night temperatures decrease during the influence of the moderate air mass, as of Saturday/Sunday night compared to previous nights, and the weather becomes cold in the hours of the first part of the night, and later turns to be relatively cold in different parts of the Kingdom, especially the mountainous heights and the plain areas, to touch the temperatures The lowest in parts of those areas is around 12 degrees Celsius.

Coinciding with the occurrence of a significant increase in surface humidity levels to exceed 95%, which causes the formation of fog over the high mountainous heights, and perhaps parts of the eastern plains. 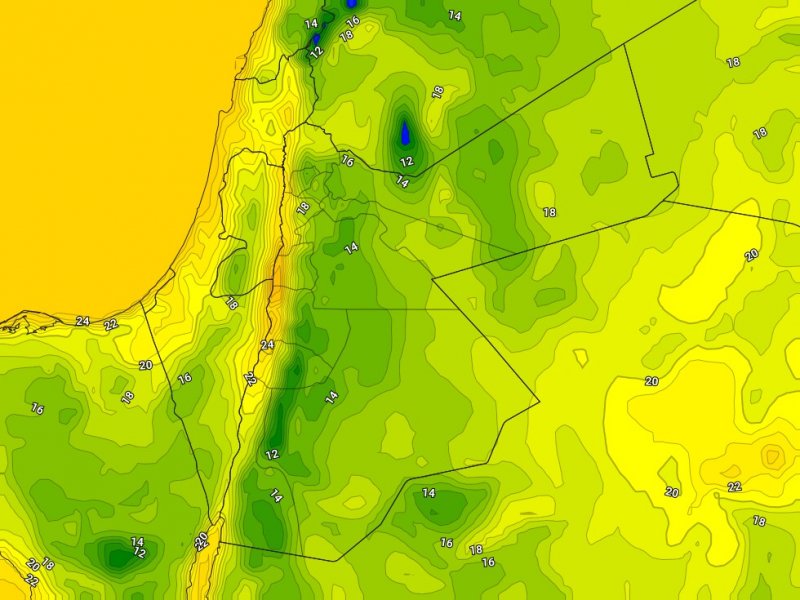 Twenty degrees temperatures in large areas of the Kingdom, Saturday and Sunday

As the Kingdom is affected by the moderate air mass, the temperatures drop to be the maximum during daylight hours in the mid-twenties in many regions of the Kingdom, including the capital Amman, especially on Sunday, while the maximum temperatures range between 32 and 34 degrees in the Jordan Valley, Aqaba and the Badia regions. It is expected, God willing, that moderate-speed northwest winds will continue to blow over the Kingdom in the coming days, active in the afternoon and afternoon hours and be accompanied by strong gusts that cause dust and dust in the desert and open areas.

Recommendations from Arab weather for the coming days

• Wear a light coat when leaving the house during the night and early morning hours, especially for children.

• Attention to the danger of low horizontal visibility due to fog in the mountainous heights and the eastern plains.