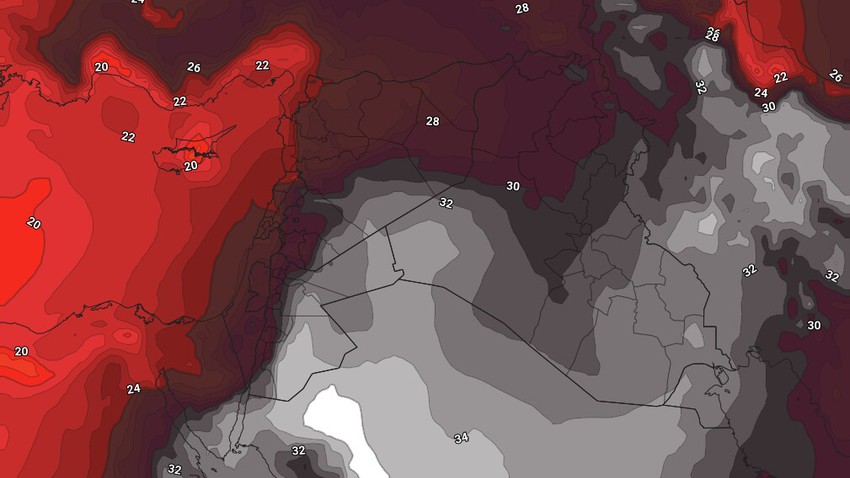 Arab weather - the latest outputs of the processed numerical models indicate that the Kingdom will be affected again on Wednesday (the beginning of September and the first days of autumn in meteorology ) with a hot air mass, as temperatures rise again to be higher than their rates for this time of the year, and the weather is Hot in general, while it is very hot in the Jordan Valley, Aqaba and the Badia regions, so that the temperatures are forty in those areas.

With the appearance of some clouds at medium and high altitudes, especially in the southern and eastern regions, and fluctuating winds, light to moderate speed, sometimes active over some areas and causing dust and light dust.

There is a decline in the intensity of the hot air mass from the Kingdom on Thursday, so that the temperatures drop slightly while remaining above their rates for this time of the year, and the weather is hot in the mountainous heights, and very hot in the Jordan Valley, Aqaba and Badia regions, with the appearance of some clouds at medium altitudes. Especially high in the southern and eastern regions.

It is also expected that moderate westerly winds, sometimes energized and accompanied by strong gusts, cause dust and dust in desert areas.

It is expected, God willing, that night temperatures will return to rise, as the weather is warmer than the previous nights, especially on Wednesday/Thursday night, and the weather tends to be moderate over mountainous heights and plain areas during the late night hours.

Wednesday is the first day of autumn in meteorology

The first Wednesday of September marks the beginning of the autumn season from the point of view of meteorology, in the northern hemisphere. It extends until November 30, after which winter begins on December 1.

To see the details of the weather for the 14 days in your area, download the Arab Weather app

With the beginning of the autumn season in meteorology, the distribution of weather systems begins to change, and the movement of cold air masses over the Atlantic Ocean and the entire European continent becomes more active, and gradually penetrates to the south, i.e. towards the Mediterranean basin, which leads to renewed rain opportunities in many regions. Levant and Arabia alike.

It is noteworthy that there is a difference between the date of the beginning of autumn in the science of meteorology and the beginning of the astronomical, where he is considered the first day of the month of September / September is the first day of the fall semester of the science of meteorology in the northern hemisphere for more of the details .