Jordan | A second-degree (normal) air depression, starting from Wednesday afternoon, and its impact will deepen Thursday 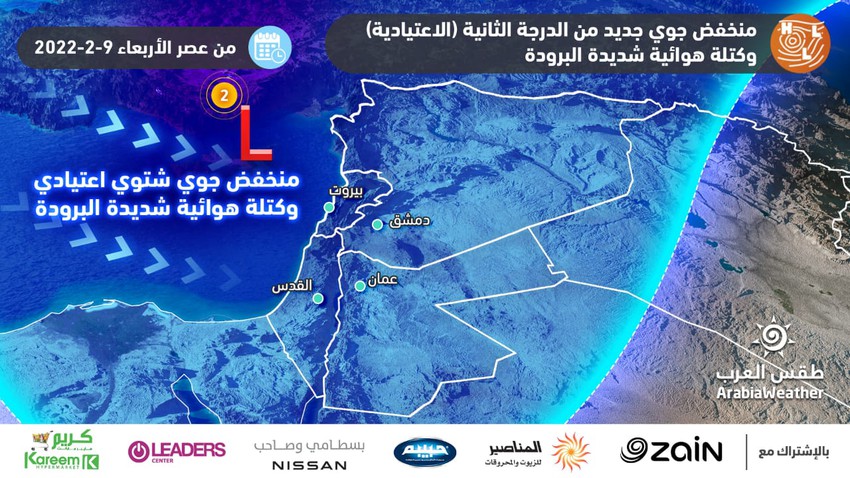 Arab Weather - The latest output of the numerical models processed by the Air Operations Department at the Arab Regional Weather Center indicates that the Kingdom was affected by an air depression associated with a very cold air mass that was classified as a second (normal) degree according to the innovative indicator of the severity of air depressions in Arab Weather.

The weather begins with the hours of the first part of Wednesday, sunny and stable, and as of the afternoon hours, the Kingdom is gradually affected by a second-degree air depression, so there is a decrease in temperatures and the weather becomes cold, and quantities of medium and low clouds appear with showers of rain at intervals in the north In the center of the Kingdom, hail showers may sometimes accompany the crossing of low clouds touching the surface of the earth, forming fog over the mountainous heights.

Winds will be active from northwest to southwesterly in the afternoon, accompanied by strong flashes that sometimes raise dust and dust in desert areas.

Scattered showers of rain and fog on Wednesday/Thursday night

Night temperatures drop compared to the previous nights on Wednesday/Thursday night, and the weather is generally cold and humid, very cold in the southern highlands, where temperatures touch zero degrees Celsius in those areas, with the possibility of freezing.

The appearance of medium and low clouds continues, with scattered showers of rain in parts of the north and center of the Kingdom, coinciding with the crossing of low clouds touching the surface of the earth, leading to the formation of dense fog sometimes over the high mountainous heights and the Badia regions.

The cold air mass crossed Thursday, and the impact of the depression deepened

It is expected, God willing, as of Thursday morning, that the impact of the depression on the Kingdom will deepen and the cold air mass will cross, so there will be a decrease in temperatures to be lower than their rates for this time of the year, and the weather will be cold and humid in all regions of the Kingdom.

And it rains at intervals in the north and center of the Kingdom, and it is not excluded that the rain will be heavy sometimes over some areas, and it is possible that the rain will be mixed with snow sometimes on the northern peaks. The continuous crossing of the low clouds touching the surface of the earth, which works to form fog over the high mountainous heights.

The winds are west to southwesterly, moderate to brisk, accompanied by strong flashes sometimes, and they raise dust and dust in desert areas.

There is a further decrease in the night temperatures on Thursday/Friday night, bringing the temperatures close to zero degrees Celsius in many parts, especially in the mountainous highlands and the Badia regions, and the weather turns to become very cold in all regions of the Kingdom.

The amounts of clouds are decreasing as they continue to appear, as the opportunity remains ripe for showers of rain in separate areas, and precipitation is likely to be in the form of snow showers over the peaks of the Shara Mountains.

With a significant increase in surface humidity, fog is formed in several regions of the Kingdom, and it is not excluded that the fog will be thick at times, and there will be a decline in the wind speed to be light westerly to moderate speed, sometimes active over some areas, especially the southern heights. 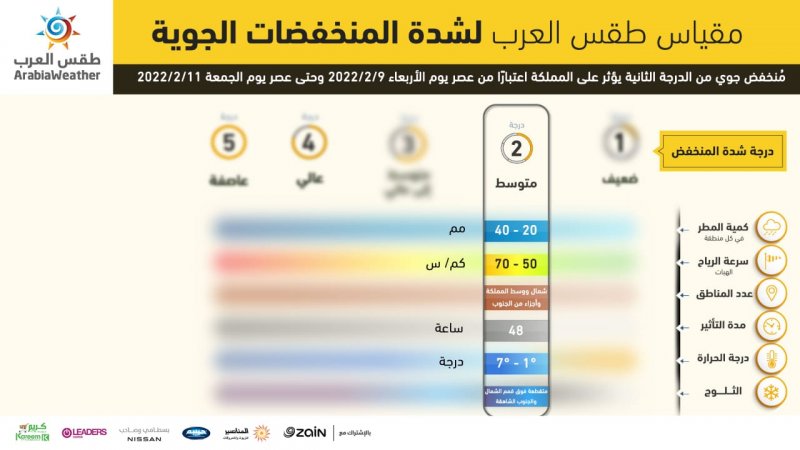 For more news, download a weather app from here