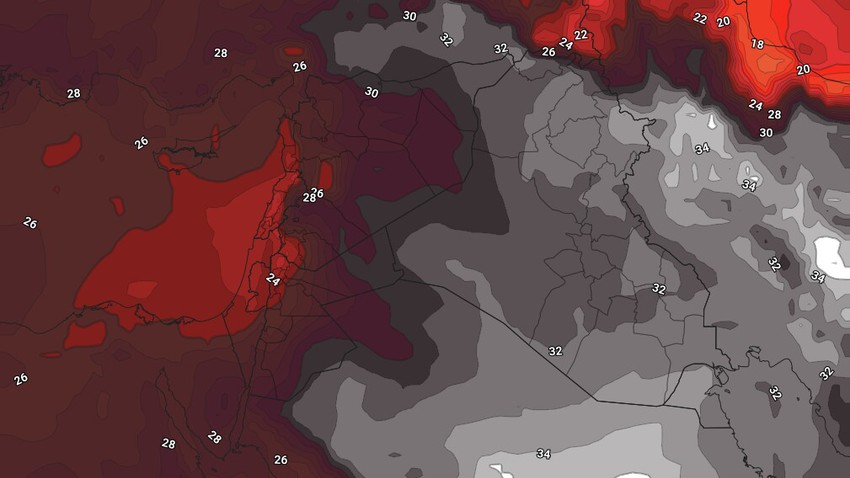 Arab weather - the temperatures around continue to be higher than their averages for this time of the year a little on Friday, and the weather is normal summer over the mountainous heights, relatively hot above the rest of the regions, and hot to very hot in the Jordan Valley, the Dead Sea and Aqaba, in addition to the Badia regions, with the emergence of Some low clouds, especially in the northern regions.

A little rise in temperatures Saturday

It is expected, God willing, that there will be a slight rise in temperatures during the hours of Saturday to become slightly higher than their averages for this time of the year, and the weather will be relatively hot in the summer in all regions of the Kingdom, and hot to very hot in the Jordan Valley, the Dead Sea and the Badia regions, with the appearance of some clouds. At medium and low altitudes in parts of the Kingdom.

The weather during the night hours is generally mild during weekend nights, and there is an increase in humidity, especially with Friday / Saturday night, but at a lower rate than the previous days, with the appearance of some low clouds, especially in the northern regions.

Northwesterly winds will continue to blow through the weekend

It is expected, God willing, that the northwest winds will continue to blow over the various regions of the Kingdom, and they will be moderate in speed, active in the afternoon and afternoon hours, and accompanied by strong gusts approaching the 60 km/hour barrier in the eastern regions, working to raise dust and dust over those areas.

Weather in the most prominent tourist areas on Friday

The case of the weather in Wadi Rum :

Case the weather in Aqaba :

State of the weather in the Sea of the Dead :