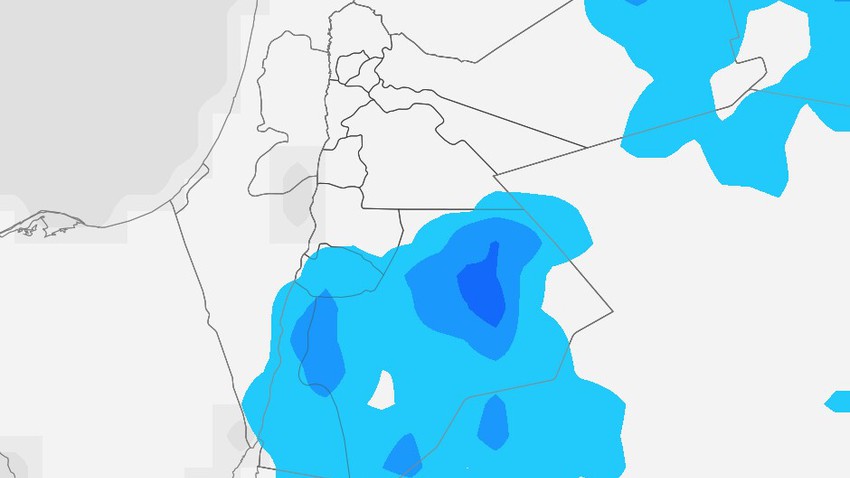 Arab Weather - The weather maps in the Arab Regional Weather Center at the Arab Regional Weather Center indicate that the southern and eastern regions of the Kingdom are affected by a state of atmospheric instability from Friday until Sunday, varying in intensity and scope of impact from day to day, and are in the form of the appearance of quantities of clouds At medium and high altitudes, cumulus clouds may be present in the afternoon and evening periods.

Where there is an opportunity for local showers of rain in narrow and random geographical ranges from the south and east of the Kingdom, concentrated in the Badia regions, and opportunities may sometimes extend towards major cities in the south of the Kingdom, especially Friday, and it is not excluded that rains will be accompanied by thunder.

Cumulonimbus clouds in the south and east of the Kingdom will be accompanied in the coming days by the activity of surface winds that raise dust and dust waves locally within the framework of cumulus clouds, which leads to a decrease in the horizontal visibility, and the dust quickly disappears after the weakening of cumulus clouds

What is the expected cause of atmospheric instability?

The reason behind the possibility of forming a state of atmospheric instability is due to the rush of northwesterly winds with temperatures lower than the Mediterranean Sea, which converge with the hot air mass affecting the Kingdom, coinciding with the rise in the surface temperature of the earth and the presence of quantities of moisture in the middle and high layers of the atmosphere. The air coming from the sea meets the hot air coming from the Arabian Peninsula, causing the formation of cumulus clouds in some areas of the south and east of the Kingdom.