Jordan | A very cold air mass of polar origins, which is unusual for its arrival in the eastern Mediterranean region at this time of year, stays near the kingdom for several days, starting from Saturday 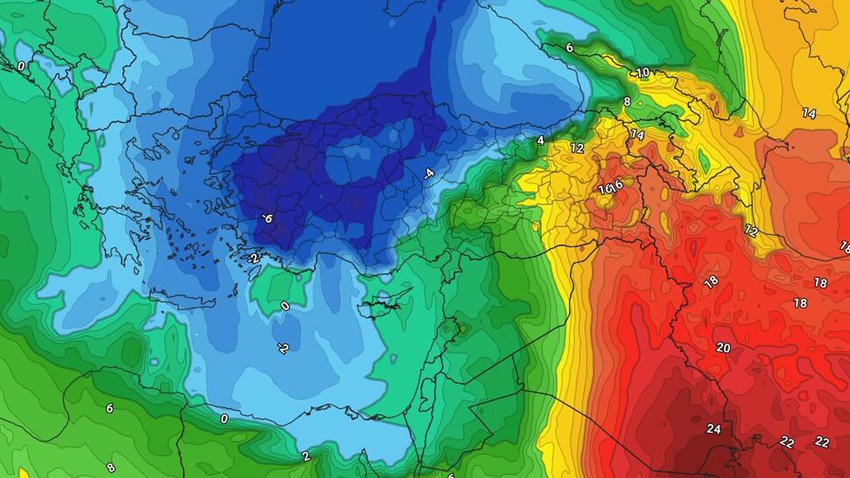 Arabia's weather - a very cold air mass of polar origins is gradually approaching and arriving in the eastern Mediterranean region at this time of the year and rushing from central Europe and staying in the region for several days.

The approach of this air mass will drop in temperatures tremendously compared to what it was in previous days and become less than its usual rates for this time of year by more than 10 degrees Celsius.

This mass is accompanied by a drastic shift in the weather from Saturday to winter, as it is generally cold and partly cloudy in most regions, with strong winds blowing most of the time.

The effects of this mass are also very clear at night hours, as the weather is very cold at night in several areas, and it is extremely cold in the southern high mountain elevations (the Sharah Mountains), so that the lowest temperatures there drop below zero degrees Celsius, with strong winds.

And it is expected that the same air mass will approach the Kingdom sufficiently towards the Kingdom on Saturday / Sunday night so that quantities of clouds will appear at different heights in the north and center of the Kingdom, and showers of rain and hail are expected in the north of the Kingdom, and it is possible that some of the showers are mixed with snow over The summits of the northern high mountain heights (Ras Munif, Thuagh Asfour, Jabal Em al-Darj, al-Qaeda Triangle near Anjara).

With the approach of this mass, ArabiaWeather recommends the following tips: