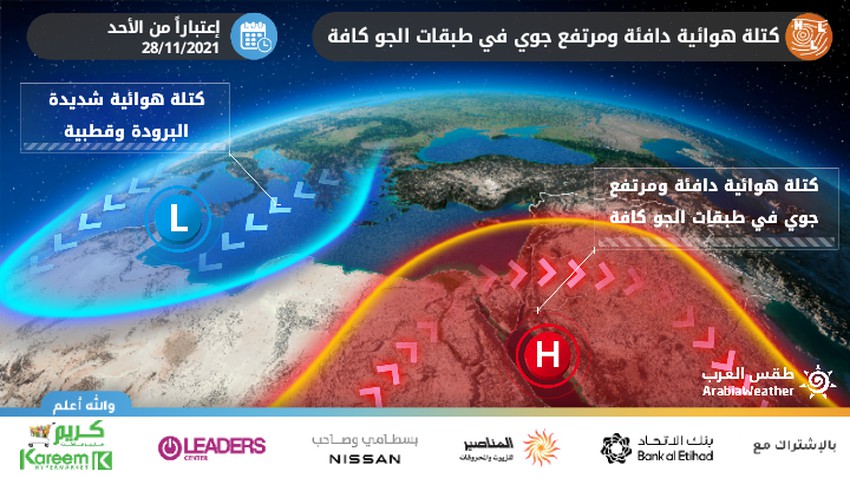 Arab Weather - The latest output of the numerical weather forecast models processed by the Weather Operations Department at the Arab Weather Center indicates the approach of a warm air mass associated with an air rise in all layers of the air on Saturday, so temperatures rise again on Saturday to become slightly higher than their rates, so the weather is Generally pleasant autumn, and warmer in the Jordan Valley, the Dead Sea and the city of Aqaba, with the appearance of some clouds at different heights.

On Sunday, the Kingdom is affected by the rush of a warm and dry African air mass accompanied by high air pressure in all layers of the atmosphere, so there is another rise in temperatures to be higher than their rates for this time of the year, and the weather is generally pleasant, tending to heat during the afternoon and afternoon hours, while It is relatively hot in the Jordan Valley, the Dead Sea and the city of Aqaba, with the appearance of some medium and high clouds in parts of the Kingdom.

The effect of the warm air mass increases Monday

The Kingdom is increasingly affected by the warm and dry African air mass on Mondays, so there is a further rise in temperatures to be several degrees higher than their averages, and the weather is sunny and moderate to hot in general, relatively hot in the Jordan Valley, the Dead Sea and the city of Aqaba.

Temperatures exceed the mid-20s Celsius in the capital, Amman, on Monday

God willing, it is expected that the weather will continue to be cold in many areas during the late night hours, especially over the high mountainous heights and the eastern plains, which calls for wearing a coat on Saturday/Sunday night.

While the night temperatures rise compared to the previous nights as of Sunday/Monday night, and the weather becomes warmer than the previous nights, it tends to be cold at the late night hours and dawn, especially in the mountainous heights and the eastern plains.

Southeast wind blowing during the influence of warm air mass

It is expected, God willing, as a result of the distribution of atmospheric pressure in the region, that the southeast winds will blow over the Kingdom from Saturday, be light to moderate in speed, active at times, especially over the western slopes of the mountainous heights, and work to raise dust and dust.

The dry eastern winds also cause the feeling of coldness during the night and early morning hours.

What is the reason for the rush of the warm African air mass to the Kingdom? 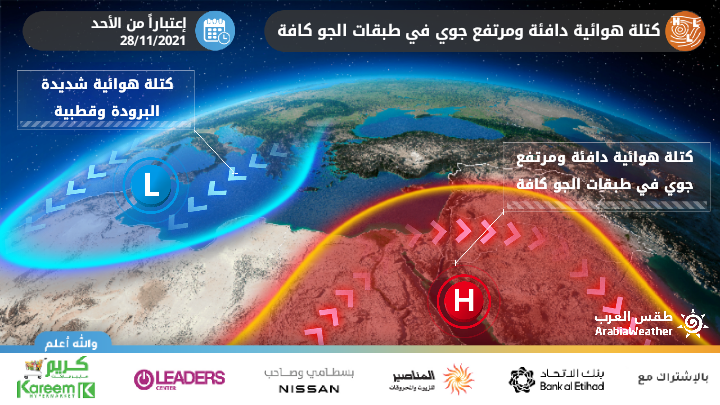 Scientifically, the reason for the movement of the warm air mass towards the Kingdom is due to the flow of cold winds accompanying a depression to large parts of the European continent, all the way to the north of the African continent, including northern Tunisia, Algeria and Libya.

This position pushes warm winds and high atmospheric pressure eastward to settle over the region, including the Kingdom and the Arabian Peninsula.

TV Intervention - The Kingdom | Increasing the intensity of weather events in the coming hours, God willing - details with Muhammad Al-Shaker