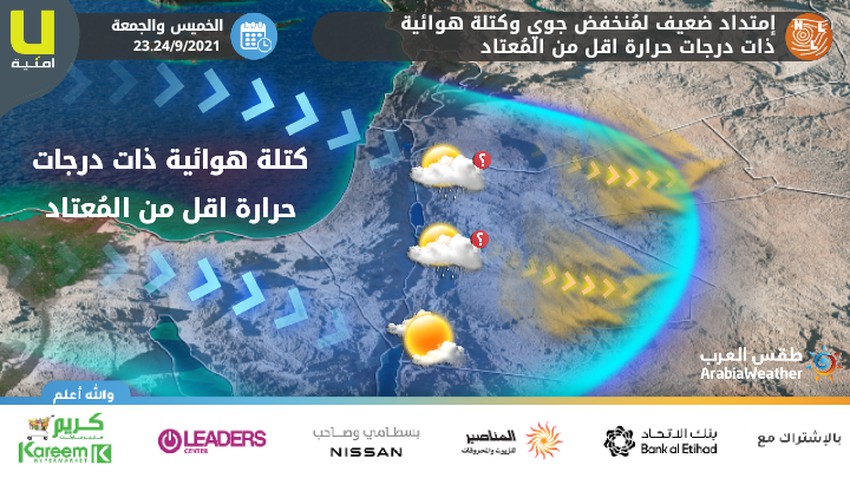 Arab Weather - The latest output of the numerical weather models processed by the Air Operations Department of the Arab Weather Company, indicates that the Kingdom was affected by the end of the week with a weak extension of an air depression centered over Turkish territory, and accompanied by an air mass with lower temperatures than usual, bringing with it radical and tangible changes to the atmosphere . the details

The impact of the Kingdom begins on Thursday with a low air extension accompanied by the air mass with lower temperatures than it is used to, so there is a significant drop in temperatures on Thursday, becoming lower than their rates for this time of the year, and the weather is humid and mild in the mountainous heights, Relatively hot in the Jordan Valley, the Dead Sea and the city of Aqaba, with the appearance of clouds at medium and low altitudes, especially in the northern regions.

The effect of the air mass increases with lower temperatures than usual and reaches its peak on Friday, so that the temperatures drop additionally, to be much lower than their rates for this time, and the weather is humid and nice autumn over the high mountainous heights, relatively hot in the Jordan Valley, and the Dead Sea Aqaba, and the Badia regions. 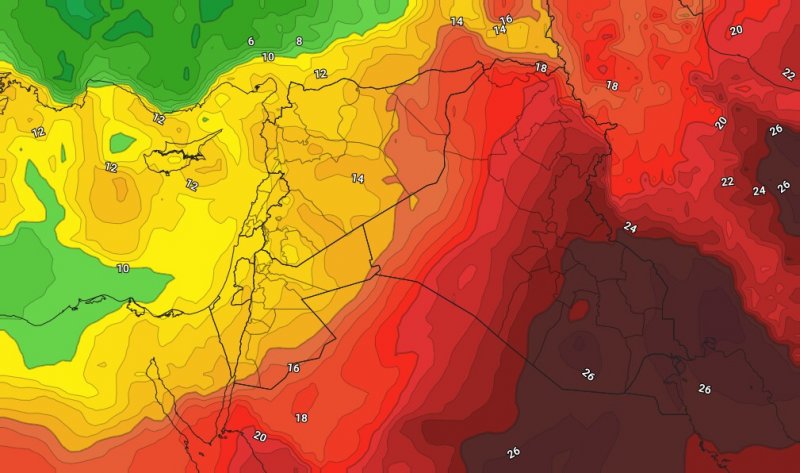 Temperatures will be at the beginning of the 20th in the capital, Amman, and many major cities, especially the mountainous ones, and shifted to below 20 degrees in the Sharah Mountains in the south of the Kingdom, with the appearance of quantities of low clouds, especially during the early morning hours, with the formation of fog in the mountainous heights during the morning due to crossing Low clouds touching the Earth's surface.

God willing, it is expected that the night temperatures will decrease with the night of Thursday/Friday, so that the weather becomes cold to relatively cold in most regions of the Kingdom, with the exception of the Jordan Valley, the Dead Sea and the city of Aqaba.

The decrease in night temperatures peaks with Saturday/Sunday night, so that the weather is relatively cold or colder than what is usual in most regions of the Kingdom, especially the high mountainous heights.

This coincides with significantly high levels of humidity, with the appearance of large amounts of low clouds, and the formation of fog over the high mountainous heights and the eastern plains, and it is not excluded that the fog is sometimes thick.

A chance of scattered showers of rain in the north and center of the Kingdom, in addition to the Sharah Mountains

Air models numerical outputs result indicate increasing clouds density low in the atmosphere to the presence of the probability of precipitation scattered showers of rain on "a penalty north and center of the kingdom, leading to parts of the Sharah mountain peaks", and as of late hours of the night from Thursday night / Friday And the dawn of Friday, and until the morning hours of Friday, and the first chances of rain are expected for the current autumn, God willing. 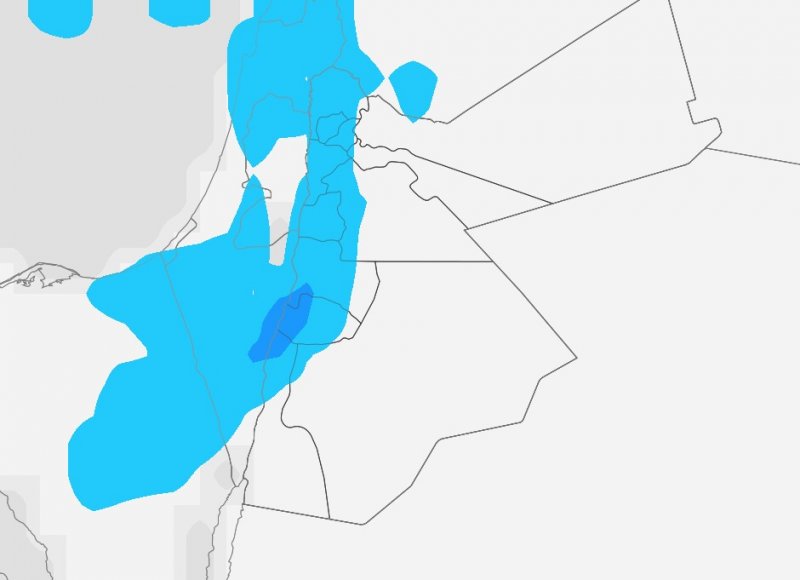 Westerly to northwesterly moderate winds of active speed will blow over the Kingdom on Thursday and Thursday, and the active winds are accompanied by strong gusts that touch the 60 km/hour barrier over some regions of the Kingdom, causing dust and dust in the desert and open areas.

There will be a decline in wind speed on Friday, so that it becomes moderate in speed, sometimes active and causing dust and light dust in desert areas.