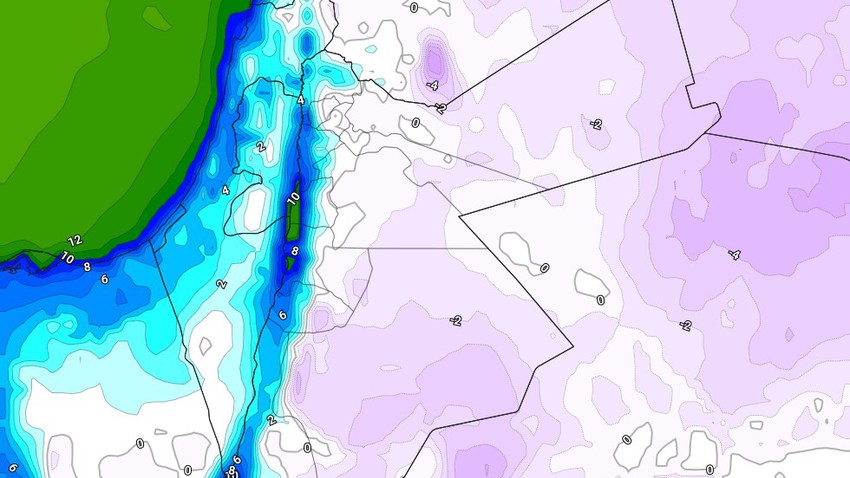 Arab Weather - The latest output of the numerical weather models processed by the Air Operations Department at the Arab Regional Weather Center indicates expectations of a sharp drop again in night temperatures with Thursday/Friday night hours to become temperatures around below zero degrees Celsius over many areas, including the capital Amman .

Where it is expected that temperatures will reach below zero degrees Celsius by about 5 degrees Celsius in the regions of the eastern plains and the Badia, in addition to the high southern elevations.

It is expected, God willing, that the sharp drop in temperatures will coincide with a significant increase in surface humidity due to the saturation of the earth with rain water, coinciding with the occurrence of stillness on the speed of the wind and the clarity of the atmosphere throughout the night hours, as all the weather conditions leading to the formation of frost and freezing are available.

As a result, a strong wave of frost and freezing is expected that will include most regions of the Kingdom, including agricultural areas such as agricultural lands in the Badia, in addition to the Jordan Valley areas, especially the northern ones, and ice will form again on wet roads and in places where water gatherings are witnessed.

It is expected that frost and freezing will continue to form in many parts of the Kingdom until the late hours of Friday morning, especially in the mountainous highlands and the Badia regions.

In such weather conditions, it is advised to pay attention to the formation of frost and freezing and its impact on crops and livestock, in addition to taking the utmost care and caution while walking on roads that witness the formation of ice. It is also advised to cover exposed pipes and put antifreeze in vehicles.