Jordan | An air mass affecting the Kingdom leads to important changes in the weather, starting from Monday evening. Details and recommendations 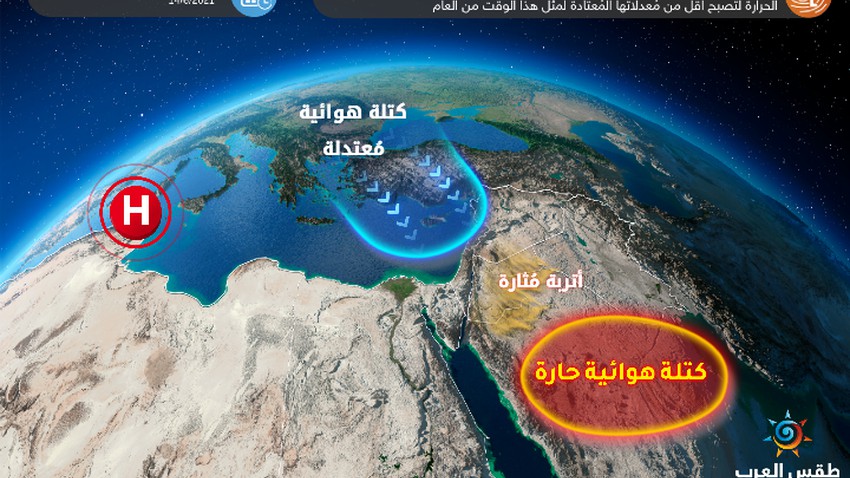 Arab weather - God willing, it is expected that the effect of the relatively hot air mass will decrease from the western regions of the Kingdom on Monday as a result of the approach of a moderately hot air mass with temperatures lower than normal rates for this time of the year, so that the weather on Monday is generally mild in summer, and temperatures The temperature is lower than the normal rates for this time, but the eastern regions will remain under the influence of the remnants of the relatively hot air mass so that the weather remains hot in those areas, with the appearance of clouds at medium and low altitudes, especially in the morning hours.

The Kingdom continues to be affected by moderate air mass for the rest of the week, and temperatures are lower than their rates

The Kingdom will continue to be affected on Tuesday and until Thursday in principle by the moderate temperature air mass, so that the temperatures continue to decline further, to be lower than their usual rates for this time of the year, and the weather will be mild summer in most regions of the Kingdom, relatively hot in the Jordan Valley and the Badia regions, Clouds appear at medium and low altitudes, especially in the northern regions.

Northwest winds blow over the Kingdom on a daily basis, and they are moderate in speed, but they will be active during the afternoon hours and the afternoon and evening periods over most regions of the Kingdom, and are sometimes accompanied by strong gusts approaching the 70 km/hour barrier in desert areas, which leads to stirring dust. And dust in those areas, in addition to the exposed areas, especially on Mondays and Wednesdays.

The return of cold nights that call for wearing light coats

According to the latest updates of received numerical models, it is expected that night temperatures will decrease again, starting from Monday night / Tuesday, and during the rest of the nights of the week, so that the weather will be pleasant to cold in general, relatively cold over the high mountain heights during the late night hours. Arab weather by wearing light coats in the event of a desire to sit or go outside the house during the late hours of the night, especially for the inhabitants of the mountainous heights, and there is a noticeable increase in humidity, and there are chances of fog forming in parts of the northern plains during some nights.

What is the reason for the mild climate in the Kingdom, even though we are in the summer? 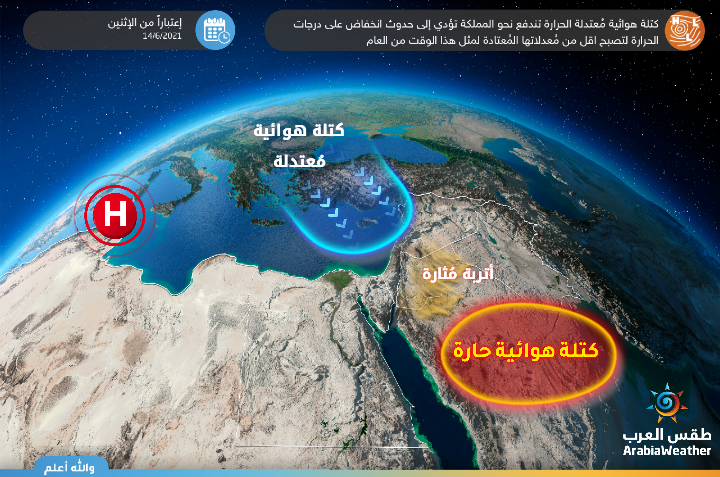 Many people may think about the reason for talking about temperate weather, and that temperatures are lower than their usual rates even though we are in the summer climatically, and the reason about the expected mild weather is the control of several air heights over Western Europe, forcing some of the moderate air masses present In parts of the European continent, to rush towards the eastern part of the continent to Turkey, and as a result, moderate-temperature marine air currents rush from the air mass located over Turkish lands, which prevents any hot air masses from deepening towards the Kingdom.

See the details of the weather in your area for 14 days through the Arab Weather application, download it now .