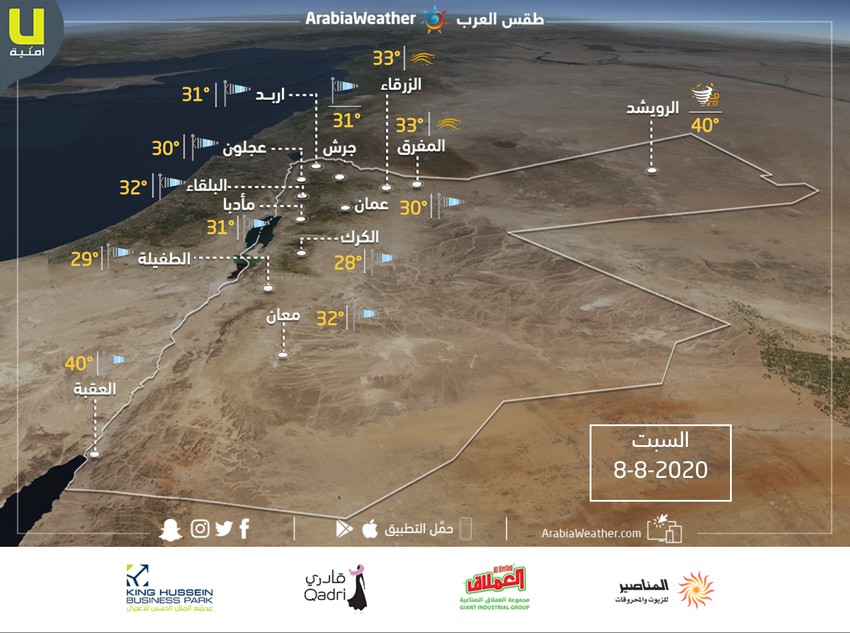 Jordan | An air mass with lower temperatures than the average affects the Kingdom ... and a gradual decrease in the temperature

Arab Weather - The Kingdom is gradually affected, starting from Saturday, by an air mass with lower temperatures than the average levels, with high surface humidity rates being exuded from the Mediterranean Sea

Where there is a gradual decrease in temperatures, so that the temperature becomes slightly less than the average for this time of the year, and the summer weather is moderate over the mountain heights, and relatively hot in the rest of the regions.

Dust waves expected in the east and south of the country

The winds are active with the afternoon hours accompanied by strong gusts in large parts of the country causing dust waves that are sometimes dense, especially in the south and east of the Kingdom, and the winds in the desert regions, especially the eastern regions, are strong with strong gusts of up to 70-75 km / hour

With the hours of the night , there is a significant decrease in nighttime temperatures compared to Friday / Saturday nights, and a noticeable rise in humidity levels, and the weather turns to become cooler over the mountainous heights, pleasant in the rest of the regions and noticeably wet.

Quantities of clouds and low clouds appear, some of which touch the tops of the mountains, and the winds will be northwesterly moderate to brisk, with strong gusts sometimes.