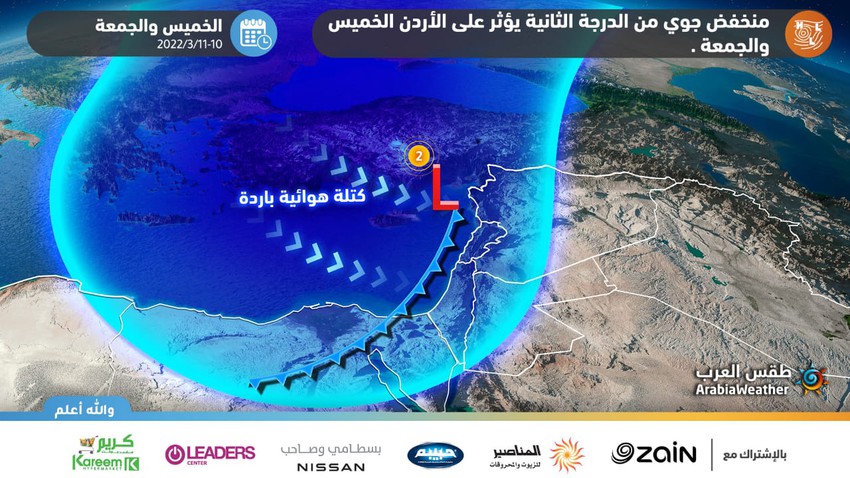 Arab weather - a huge air rise is concentrated in the regions of the middle of the European continent and extends towards the north-east of the coming days, and as a result of this air high, it is expected that a very cold air mass will rush from Siberian regions towards the east of the European continent and is stationed over Turkish lands, working to form an air depression that has been classified from Second degree and subject to development.Details

The depression approaching the Kingdom on Thursday

An air depression is approaching the Kingdom on Thursday and a very cold air mass, where temperatures drop significantly and the weather is relatively cold in many areas, with the appearance of clouds at medium and low altitudes, especially in the north and center of the Kingdom, and sporadic showers of rain and hail gradually fall over the north of the Kingdom. Sometimes to parts of the central region, with moderate to active westerly winds, accompanied by strong gusts that raise dust and dust.

Increased chances of rain and hail on Thursday/Friday night

Temperatures drop on Thursday/Friday night, and the weather is cold and very cold over the high mountain heights, clouds continue to appear at medium and low altitudes, and chances of rain and hail increase at intervals in the north and center of the Kingdom, sometimes extending with the late night hours to parts of the southern regions .

The actual impact of the depression begins on Friday, and January temperatures are expected

It is expected, God willing, that the depression and the very cold air mass of polar origin will deepen on Friday, so there will be a further decrease in temperatures to be less than their rates by about 10 degrees Celsius, and the weather will be cold to very cold, and quantities of clouds appear at medium and low altitudes and rainfall And hail showers at intervals in the north and center of the Kingdom, sometimes extending towards the southern regions. It is also expected that sometimes snow showers will fall over the high mountainous heights that are more than 1100 meters above sea level. Fog is formed over the mountains as a result of the low clouds crossing and touching the surface of the earth.

Coinciding with the gusts of brisk westerly winds accompanied by strong gusts that touch the 80 km/h barrier in desert and open areas, causing the formation of dust waves in those areas. 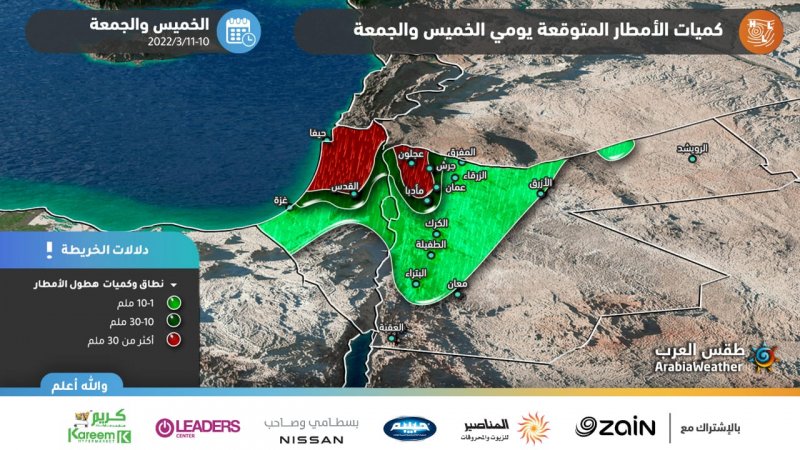 The effect of the polar winds deepened on the evening and night of Friday / Saturday, coinciding with the decrease in the chances of precipitation

The effect of the very cold polar winds deepens in the evening and night of Friday / Saturday, but this coincides with the decline in effectiveness, as amounts of low clouds appear, and the opportunity remains for showers of rain in some areas in the form of snow over the mountainous heights, and the chances of precipitation gradually fade as the night hours pass. The wind remains active and gradually decreases in speed. 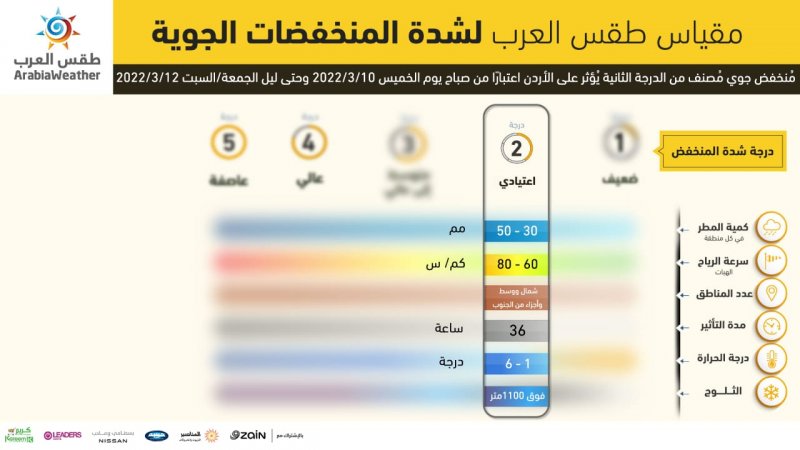