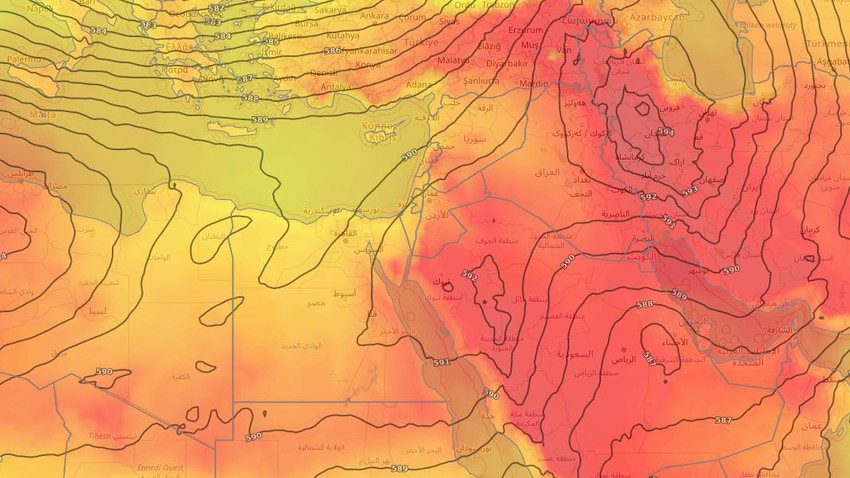 Weather of Arabia - The Kingdom will bid farewell to the temperate weather, starting on Tuesday, August 16, God willing, to be affected by a relatively hot air mass rushing from the desert of the Arabian Peninsula; As a result, temperatures rise in all regions of the Kingdom.

In the details, the Kingdom is affected by an air mass that is higher than usual on Tuesday, so that normal summer weather prevails in the mountainous highlands, which tends to heat in the afternoon and afternoon hours, while the weather is hot in the Jordan Valley, the Dead Sea, Aqaba and the desert areas, and the winds are northwesterly moderate in most areas. The Kingdom, while it is northern on the Aqaba region, is sometimes active, and clouds appear at mid-afternoon and evening in the Badia regions. Scattered showers of rain may be interspersed with them. At night, a pleasant to moderate atmosphere prevails in general, with the appearance of low clouds in Some areas during the early morning hours.

Weather maps indicate expectations of an additional rise in temperatures at the end of this week, exceeding their normal rates by 2-4 degrees Celsius in most regions of the Kingdom, and a relatively hot summer atmosphere prevails in all major regions and cities, and it remains hot in the Jordan Valley, the Dead Sea and Aqaba. The weather at night is hotter than usual and tends to be temperate during the late night and early morning.