Jordan | An extension of the Red Sea depression, starting from Friday, so what are its effects on the Kingdom? 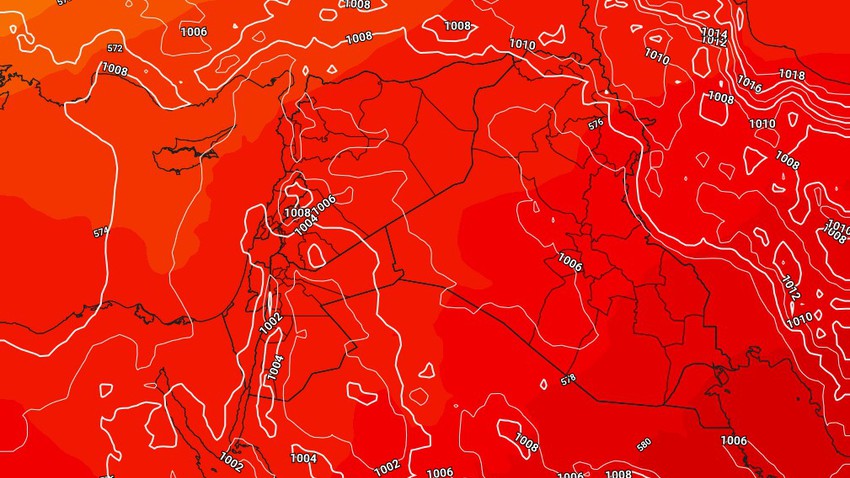 Arab Weather - The latest outputs of the numerical models received at the Arab Weather Center indicate that the Kingdom is affected, as of Friday, by the extension of the so-called Red Sea depression, which is associated with a relatively hot air mass coming from the Arabian Peninsula, so a clear rise in temperatures occurs to be higher than their rates for this time of The year varies by several degrees Celsius, and the weather is warm to relatively hot in all regions of the Kingdom, especially in the low-lying areas, while the weather is hot in the Jordan Valley, the Dead Sea and the city of Aqaba, coinciding with the appearance of clouds at medium and sometimes high altitudes.

On Saturday, the Kingdom is increasingly affected by the relatively hot air mass that accompanies the extension of the Red Sea depression, and the weather will be relatively hot in all regions of the Kingdom during the afternoon and afternoon hours, while it remains hot in the Jordan Valley, the Dead Sea and the city of Aqaba, and clouds continue to appear at high altitudes.

Southeast winds will blow again at the end of the week

The southeast winds will blow over the Kingdom again at the end of the week. They are moderate, active in the morning and before noon in particular, and they are exciting to dust and dust in the desert and open areas, and work to increase the proportion of dust in the atmosphere.

Night temperatures rise significantly during the weekend, and the weather turns warm in all regions of the Kingdom during the hours of the first part of the night, but with the late night hours and dawn, the weather tends to moderate over parts of the plains and mountains, especially in the high mountainous heights of the south of the Kingdom.

What is the Red Sea Depression?

The extension of the Red Sea depression towards Jordan usually causes a rush of hot air masses and sometimes heat waves during the spring and autumn, and this depression shrinks during the summer and the chances of its impact on the Levant region diminish.

On the other hand, the Red Sea depression causes atmospheric instability, especially if its extension towards the Kingdom coincides with a rush of cold air masses from the north. In this case, strong instability forms associated with thunderstorms and dust storms, usually during the spring and autumn seasons.