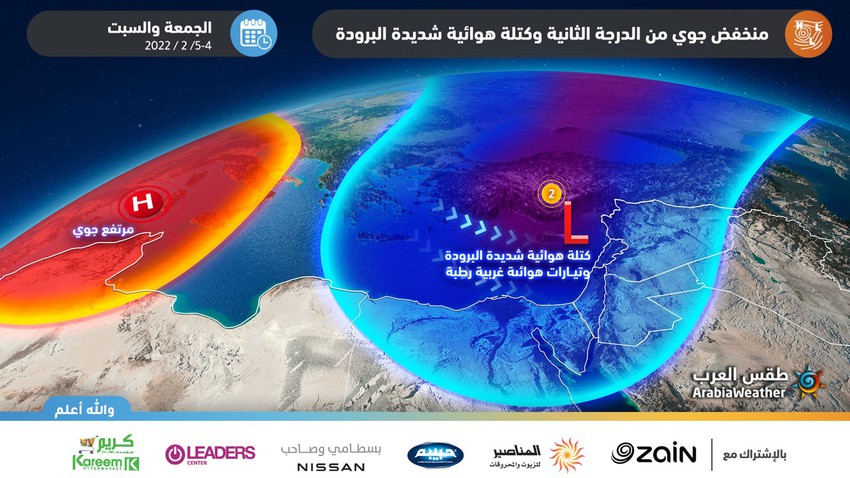 Weather of Arabia - The latest outputs of numerical weather models indicate that the Kingdom was affected by an air depression and a very cold air mass, as of Friday dawn, and the air depression was classified as a second (normal) degree.

The depression begins at dawn on Friday

The Kingdom is affected by an air depression as of Friday dawn, but there is a chance of rain showers in the north, central and south of the Kingdom on Thursday/Friday night, that is, before the actual impact of the air depression begins due to a limited state of air instability that precedes the depression, and from dawn Friday the Kingdom is actually affected With a second-degree depression and the accompanying very cold air mass, large amounts of medium and low clouds appear, and, God willing, showers of rain and hail fall over the north and center of the Kingdom and parts of the southern regions.

As the Kingdom is increasingly affected by the very cold air typology, there is a significant drop in temperatures on Friday to be lower than their rates for this time of the year, and the weather will be cold to very cold in general.

God willing, it is expected that on Friday, moderate to brisk southwesterly winds will blow over the Kingdom, accompanied by strong gusts that will touch the 80 km/h barrier over some areas and will raise dust and dust in the southern and eastern desert regions. 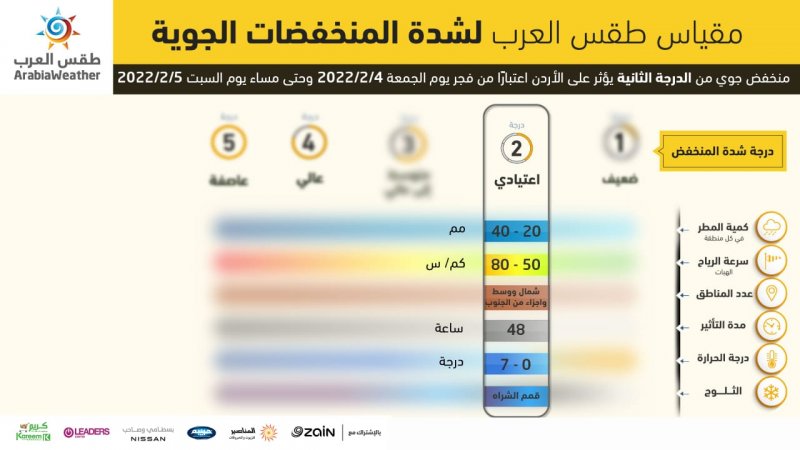 The depression is moving east from the Kingdom on Friday/Saturday night, and western air currents saturated with moisture rush behind it, as the weather continues to be cold to very cold, and rain falls at intervals in the north and center of the Kingdom, extending in the form of showers to parts of the southern regions, and the opportunity remains for showers of snow on the tops Shara Mountains.

Large amounts of low clouds pass through, forming very dense fog at intervals over the high mountainous heights, warning of low or no visibility at times.

The humid western air currents will continue on Saturday, and the opportunity remains for showers of rain in different regions of the Kingdom, coinciding with the continuation of the clearly cold weather.

Arab weather recommendations during the depression