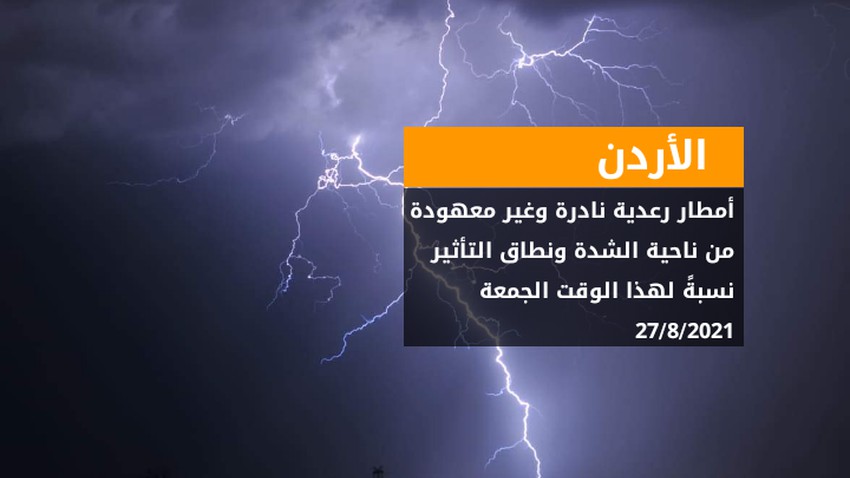 Thunder rain included Wadi Rum, Wadi Musa and Tafila Governorate, in addition to the desert road and parts of Maan. The rain was heavy at times, which formed torrents in the valleys, and thunder clouds were accompanied by downward winds that led to the formation of dust waves in parts of the southern regions.

The weather forecast staff at the Arab Regional Weather Company for Meteorology and Forecasting described the rains that occur in the southern and eastern regions of the Kingdom as unusual and rare for such a time of the year in terms of the extent of its geographical impact and the intensity of influential clouds, especially since we are in the month of August.

It is worth noting that during the past years, the Kingdom witnessed air instability in the month of August, but it was not in this intensity and breadth, as some local thunderclouds were forming in limited parts of the southern regions, specifically the Badia regions for a short period.

After analyzing the numerical weather forecast models, it is possible to explain what happened in the southern regions with a preliminary scientific explanation, whereby, with reference to the influential air system, a low thermal extension was observed, with the flow of quantities of moisture in the middle and high layers of the atmosphere, coinciding with the high temperatures on the surface of the earth and the presence of high mountains in The southern regions contributed to the presence of warm air currents rising towards the atmosphere.

This caused rapid condensation and the clouds turned into thunderstorms.