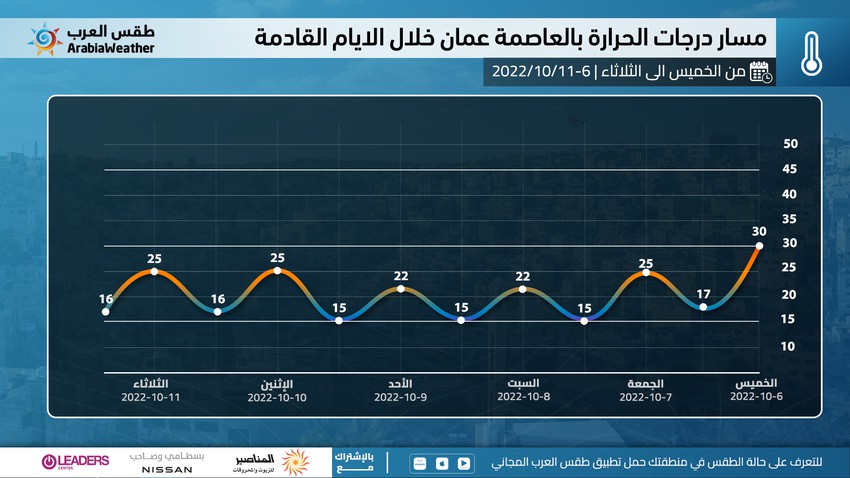 Arab Weather - The numerical models inside the corridors of the "Arab Weather" center are still forecasting the rush of a nice-temperature air mass to the eastern basin of the Mediterranean, including the Kingdom, as of Friday, which carries a clear drop in temperatures and a complete decline in the mass Relatively hot in the east, away from the atmosphere of the Kingdom.

In the details, an air mass has formed throughout the European continent during the past days, and a relatively cold air mass descended to the east of this height directly towards the Balkans, the Greek islands and Turkey, and it is expected to deepen to the south and southeast - and lose its cold characteristics - and head to the eastern basin of the Mediterranean, including In the Kingdom, it arrives in the form of a “humid and warm air mass” on Friday, and its impact will increase at the beginning of next week, God willing.

According to the report issued by the "Arab Weather" Center, temperatures are expected to drop in all regions of the Kingdom on Friday, slightly below their usual rates for this time of the year, in addition to the expected mild daytime weather in the mountains, where the greatest is in the mid-twenties. It is expected that the mass of pleasant heat in the Kingdom’s atmosphere will deepen early next week, and will be several degrees lower than its usual rates, and the weather will be pleasant autumn during the day in most areas, and relatively hot in the Badia, Jordan Valley, Bahramit and Aqaba regions, with the appearance of low clouds, especially in the mountains, and thus the atmosphere Suitable for meetings and outdoor activities with family and friends during the day throughout the Kingdom during the weekend. 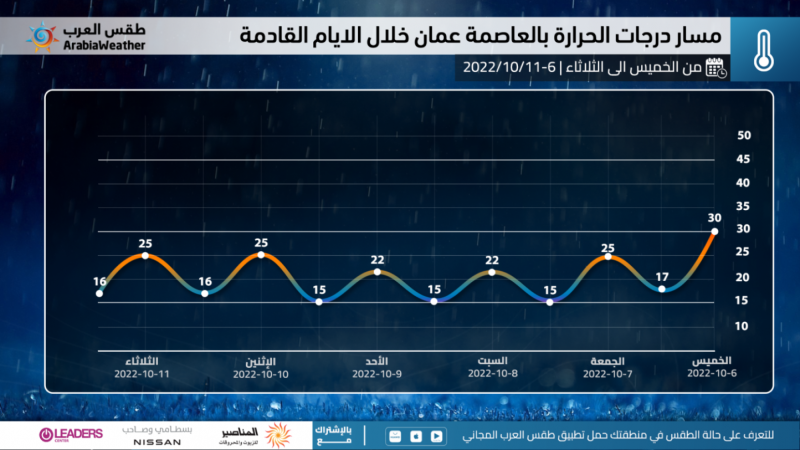 It is expected that the temperature will drop significantly during the night hours, as it is expected that the lowest temperature in the capital, Amman, will be 15 degrees Celsius, and the tangible temperature will be less than that in a number of areas. It is recommended during the next night hours to wear warmer clothes compared to the previous nights, and the weather may not be suitable for outdoor sessions at night in several areas. Temperatures also drop to lower values in the eastern plains and southern highlands, and the lowest temperatures may touch 10 degrees Celsius in those areas.

Jordan: A drop in temperature, with a chance of scattered showers of rain on Tuesday