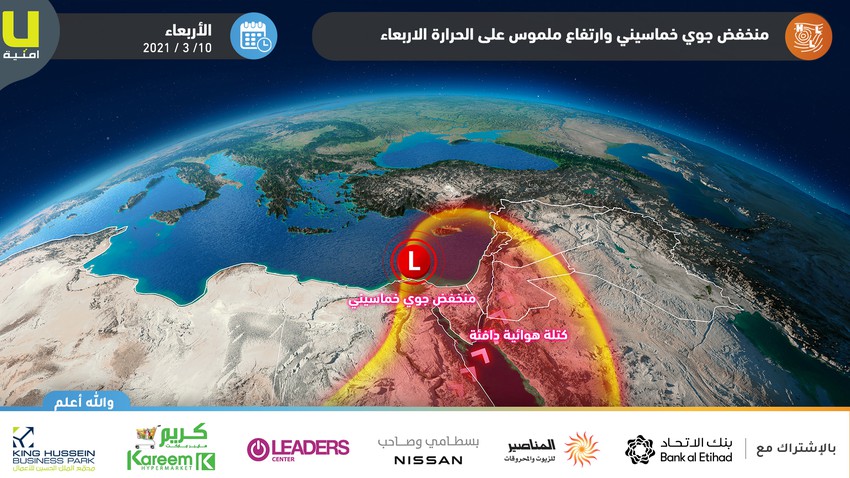 Arab Weather - The Kingdom will gradually be affected, starting from Tuesday evening, with the beginning of a five-point depression and an accompanying warm air mass that intensifies on Wednesday, as degrees rise significantly and significantly to become much higher than their rates for this time of year.

Tuesday ... a slight rise in temperatures in the front of the Khamasini depression

A Khamasini depression is stationed during the day to Tuesday over western Egypt, where temperatures begin to rise gradually and the weather is very warm in all regions and relatively cold over the high mountains during daylight hours.

But at night, the temperatures will rise significantly, and Tuesday / Wednesday night will be a warmer night than we are used to during the past nights.

Wednesday ... a warm air mass and a tangible rise in the temperature

On Wednesday, the Kingdom is directly affected by the Khamasini depression, where temperatures rise dramatically with the passage of the warm air mass associated with the depression and coming from the African Sahara, and warm weather prevails in all regions while it is relatively hot in the Jordan Valley, the Dead Sea and Aqaba.

Tuesday | A slight decline in the intensity of the heat wave, as the weather remained hot in various regions

Tonight | Nighttime temperatures are peaking and are remarkably warm

Jordan | Does the wind contribute to locust swarms entering the main cities in the Kingdom?