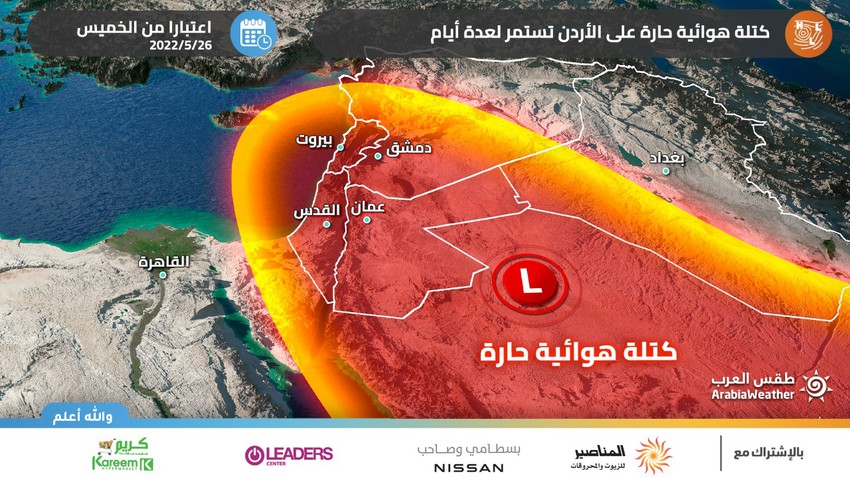 Arab Weather - The weather maps in the Arab Regional Weather Center indicate that the Kingdom is affected, as of Thursday, by a hot air mass coming from the deserts of the Arabian Peninsula, which leads to a significant rise in temperatures to become higher than their rates, and the weather is relatively hot in most regions of the Kingdom, while it is hot To very hot in the Jordan Valley, the Dead Sea and the city of Aqaba, with the appearance of clouds at medium and high altitudes in the south of the Kingdom in the afternoon.

The effect of the hot air mass intensified during the weekend

It is expected, God willing, that the effect of the hot air mass on the Kingdom will intensify during Friday and Saturday, so there will be a further rise in temperatures to be several degrees Celsius higher than their average rates. Aqaba, coinciding with the appearance of clouds at medium and high altitudes, interspersed with some cumulus clouds during the noon and afternoon hours, which may result in thunderstorms of rain in limited areas of the eastern Badia.

In the coming days, especially on Friday and Saturday, southeast winds will blow over the Kingdom in the morning until noon. They are light to moderate in speed, sometimes active and raise dust and dust when active, but the direction of the wind changes with the afternoon and evening hours to northwesterly moderate speed, sometimes active.

Night temperatures in the coming days will record increasing heights, and the weather becomes warm in various regions, and tends to heat in the Jordan Valley, the Dead Sea and the city of Aqaba, but the weather tends to moderate in parts of the eastern plains at the late night hours and dawn.