Jordan | Increasing indications of a new pentagonal depression on Wednesday, followed by a cold air mass on Thursday 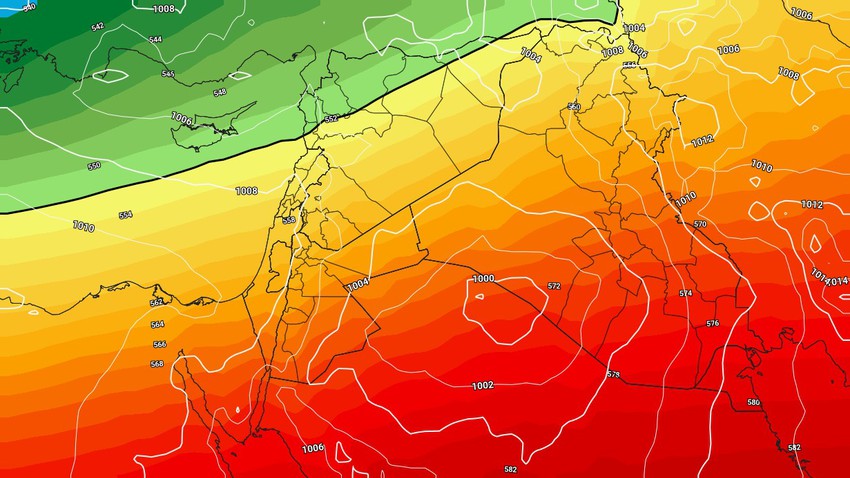 Weather of Arabia - the latest outputs of numerical models indicate that the Kingdom was affected on Wednesday by a new pentagonal depression centered in southern Jordan, where temperatures drop slightly to be around their rates for this time of the year, and cold weather prevails over the mountainous heights, and is gentle in the Jordan Valley, the Dead Sea and the city of Aqaba. With the appearance of clouds at different heights, which may cause local showers of rain over some parts, especially before noon.

Dust waves in the Badia areas on Wednesday afternoon

Westerly winds blow to northwesterly moderate speed, active at times and accompanied by strong gusts in the afternoon over the southern Badia regions, forming dust waves in those areas, causing a decrease in the horizontal visibility.

It is expected, God willing, that temperatures will decrease significantly and rapidly starting from the evening hours and the night of Wednesday/Thursday, when the weather is cold at night, with an increase in surface humidity and moderate westerly to northwesterly winds, sometimes active, and clouds appear at different heights as they prepare The opportunity, with the late night hours, of local showers of rain in parts of the Kingdom, and the formation of fog over the mountainous heights.

Indications of a very cold air mass rushing behind the Khamsini Depression, Thursday

According to the initial indicators, the Khamasini depression is expected to move eastward on Thursday, and the Kingdom is affected by a very cold air mass pushing behind the depression, so there is a significant and significant decrease in temperatures to be several degrees lower than their rates for this time of the year, and the weather is cold with the appearance of clouds at altitudes Medium and low, and there is an opportunity for showers of rain over the north and center of the Kingdom, with the activity of the westerly winds that raise dust and dust in the desert areas.

The Arab Weather website will release more details in the coming days.