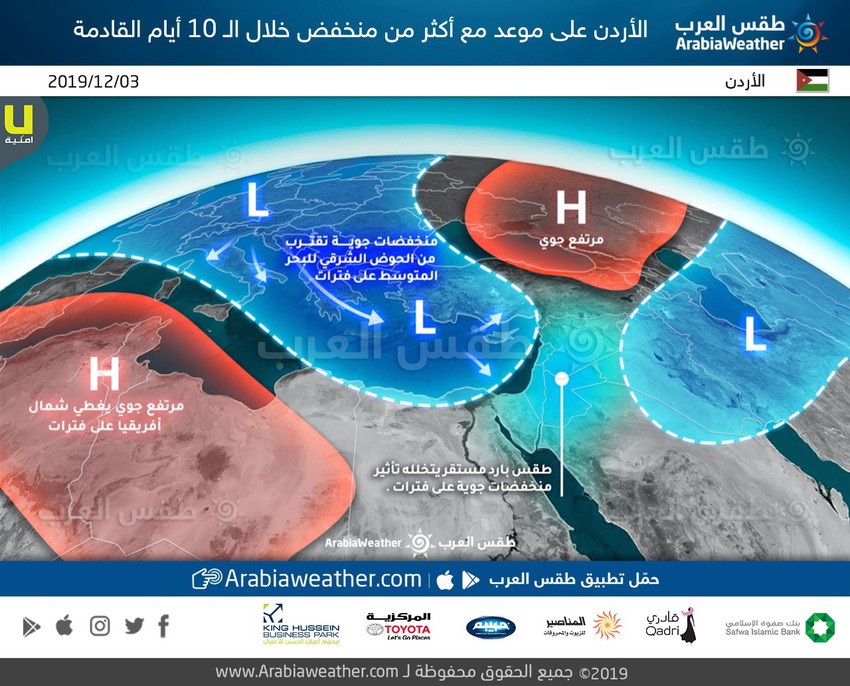 Analyzes and computer simulation data for weather forecasts indicate that Jordan and the rest of the Eastern Mediterranean countries are on a date with an impact of more than a low air over the next 10 days, making this a promising period to improve the already weakened rainy reality. In the beginning of the rainy season especially in Jordan and Palestine.

Category one low pressure - this weekend:

It is expected that the Kingdom will be affected by a low pressure currently classified as category one according to the index of measuring the intensity of low pressure systems innovated by ArabiaWeather, which consists of 5 categories (the lowest is the weakest). It is expected that rainfall will occur on Thursday in a number of areas of the north and central kingdom and perhaps some parts of the south and east. The chances of rain continue on Friday as well, while declining significantly with the hours of Saturday morning. The effect of this low pressure is followed by a leak of cold to very cold winds coming from the north towards Bad al-Sham, which contributes to a significant drop in temperatures on Saturday to low levels allowing the formation of frost at night.

Signals are accelerating as the Levant region, including Jordan, to be affected by a new low pressure next week (December 9th and 10th) that is believed to be strong enough to bring excellent rainfall to large parts of the kingdom. It is not believed that this depression would be cold enough to bring any snowfall to the Levant except the towering mountains of Lebanon. The computer simulations of weather forecasts fluctuate in their forecasts of rainfall concentrations in this depression, but the steady signals from these numerical models are that rainfall is expected to be excellent, God willing, and may be sufficient to re-route the rainy season to normal levels.

Another low pressure next week end of week:

Although the time frame is still far which would mean less accuracy in the forecasts, nevertheless, there are also good indications that the region will be on a date with a third low pressure by the end of next week (around December 12). It is not clear yet the intensity, but it's clear that there will be more rain in several areas in the Levant, including Jordan, and that the weather system in Europe and the region is not contributing to a sufficiently cold wind flow for any snowfall on the Levant except the towering mountains of Lebanon to happen.

You can check the weather forecast for any region in Jordan, Levant or even the world for the next 10 days from here .

The fiftieth winter consists of four saudis, so what are they and why were they called by that name?