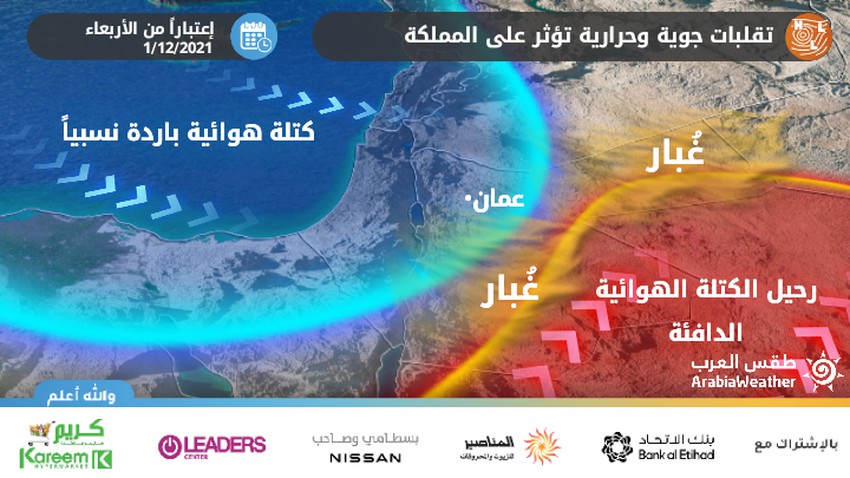 Tafas Al Arab The latest output of the numerical weather models processed by the Air Operations Department at the Arab Regional Weather Center indicates that the Kingdom was affected with the first day of winter in meteorology (Wednesday) with the first low air extension during the winter season associated with a relatively cold and humid air mass, so it occurs A sharp drop in temperatures, dropping by more than 10 degrees Celsius compared to Tuesday.

The temperatures are around their average for this time of the year, and the weather is relatively cold and humid, with the appearance of low clouds.

Temperatures remain around average Thursday, and the weather is relatively cold

Temperatures remain around their averages for this time of the year on Thursday, and the Kingdom remains under the influence of the relatively cold air mass, so the weather is relatively cold in most areas, especially over the high mountainous heights, and pleasant in the Jordan Valley, the Dead Sea and the city of Aqaba, with a scattering of low clouds.

Noticeable drop in temperature at night

There is a decrease in nighttime temperatures compared to the previous nights, and the weather during the night of Wednesday/Thursday will be noticeably cold and humid.

Night temperatures drop further with Thursday/Friday night hours, and the weather is generally cold, becoming very cold late at night and during dawn hours, especially in the southern highlands and the Badia regions, with a rise in humidity. 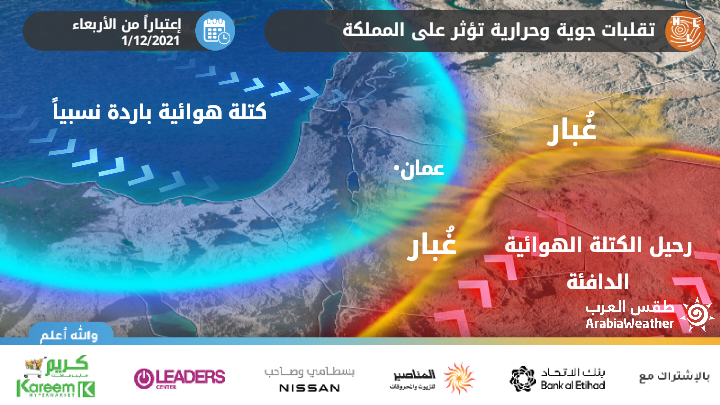 Westerly winds are blowing over the Kingdom, whose speed gradually increases to become active on Wednesday, with a steady wind speed of approximately 40 km / h in some areas. It may form for dust waves, causing a decrease or a lack of horizontal visibility, and this includes window desert roads such as the Baghdad International Road in the east of the Kingdom.

On Thursday, the wind speed will decrease to northwesterly to light to moderate speed fluctuating, and it may be active at times over some areas, especially the Gulf of Aqaba.

It is expected, God willing, and as a result of the increase in the amount of clouds in the atmosphere, that the opportunity will be created for sporadic showers of rain, starting from the hours after midnight on Tuesday / Wednesday and early Wednesday in parts of the Kingdom, especially the northern ones.

Chances of rain increase on Wednesday to include, including, the western regions of the north and center of the Kingdom, and sometimes reach parts of the southern mountain tops.

Chances of precipitation gradually decrease with the night hours of Wednesday / Thursday, so that the weather returns to gradual stability, God willing.

Jordan - Update 5:10 PM: condensation of cumulus thunderstorms over several parts of the southern Badia, including the Mudawwarah area