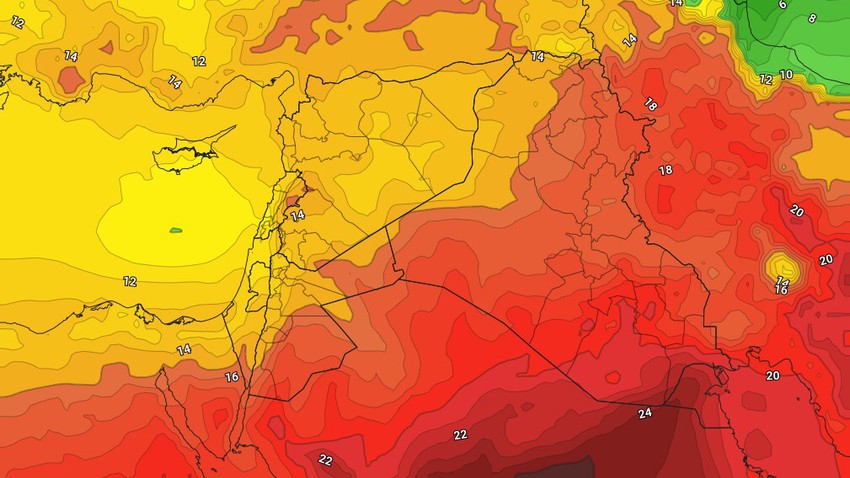 Arab Weather - The latest output of the numerical weather models processed by the Air Operations Department at the Arab Regional Weather Center indicates expectations for the continuation of the impact of the western air currents coming from the Mediterranean Sea, and accompanying the autumn air mass in the coming days.

Temperatures continue to be below average

It is expected, God willing, that temperatures will continue to be slightly lower than their averages for this time of the year during the coming days, and until Friday, when the weather will be moderate in most regions of the Kingdom, relatively hot in the Jordan Valley, the Dead Sea and the city of Aqaba, with the appearance of clouds at different heights in some areas, especially at the end of the week.

According to preliminary indicators, temperatures are expected to rise from Saturday, when they return and become around their rates for this time of year.

The northwest winds will continue to blow over the Kingdom in the coming days. They will be light to moderate in speed in general, and may be active at times over some areas. According to the initial indicators, it is expected that the dry southeast winds will return to blowing over the Kingdom as of Saturday.

The weather during the late night hours continues to be relatively cold in most regions of the Kingdom, while it is cold in the peaks of the high mountainous heights, especially the southern ones, while it continues to be pleasant in the Jordan Valley, the Dead Sea and the city of Aqaba, with a rise in surface humidity, and fog is likely to form on parts of the country. from the eastern plains.

Indications of a state of atmospheric instability from Thursday