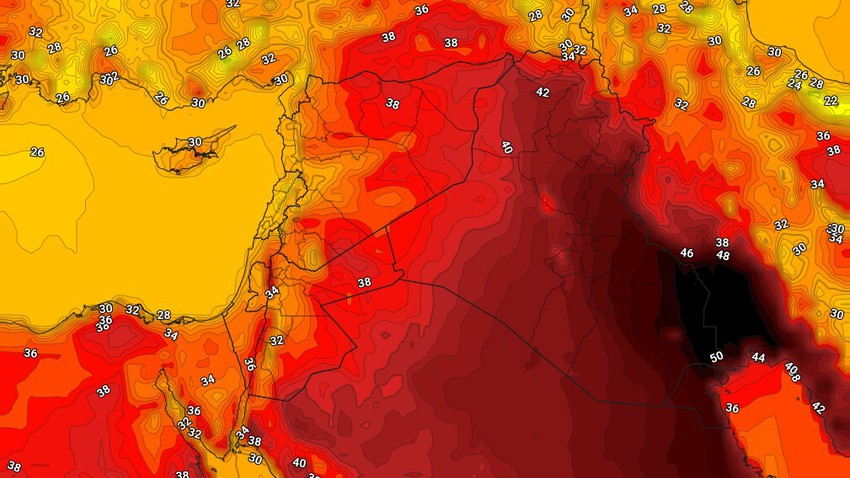 Arab Weather - The weather maps in the Arab Weather Center indicate a decline in the hot air mass during the coming days towards the Arabian Peninsula, as temperatures continue to decrease slightly and additionally for the next two days to be around slightly higher than their rates for this time of the year, and the weather is normal summer in the mountains, It is relatively hot in the rest of the regions, while it continues to be very hot in the Jordan Valley, the Dead Sea and the Badia.

Mild weather in the mountains after midweek

Mild air currents rush towards the Kingdom after the middle of the week, as temperatures continue to drop further to be around their rates, and the weather becomes moderate during the day in the mountains with the dispersal of low clouds while it is normal summer in the rest of the regions, and becomes hot in the Jordan Valley, the Dead Sea and the city of Aqaba in a normal and usual proportion for the summer in those areas.

The maximum temperatures are around the thirties Celsius in the mountains, and a little higher in the rest of the regions, including east of the capital Amman, while they are between the mid-to-late thirties in the Jordan Valley and desert areas.

Northwest wind activity in the afternoon and evening

Westerly to northwesterly moderate winds blow over the Kingdom, gradually active from afternoon until evening and are dusty in some desert areas.

Nice and humid nights for the next days

Night temperatures decrease compared to the previous period, and the weather at night becomes moderate to pleasant in many regions of the Kingdom, and the weather tends to be cold in the late times of the night in the high mountainous heights and eastern plains, and surface humidity levels gradually rise with the appearance of low clouds in the north of the Kingdom and may result in Fog formed in some mountains after midweek.

A year after the historic cyclone Shaheen swept the Sultanate of Oman.. Videos that bring back the memory of the power of the event