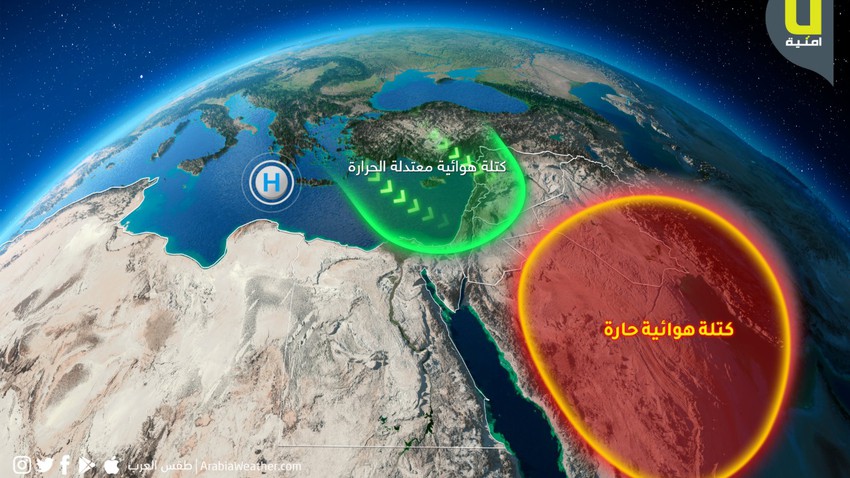 Arab Weather - The latest output of the numerical models received indicates that the Kingdom has been affected, starting from Saturday and on Sunday, by a moderately warm spring air mass rushing from the Mediterranean Sea, so there is a clear drop in temperatures on Saturday to become several degrees below their rates for this time of the year And the weather turns into spring mild during the day, with clouds appearing at lower altitudes.

On Saturday, moderate to brisk westerly winds blow over the kingdom in some areas, and they are accompanied by strong gusts approaching the 70 km / hour barrier in the southern highlands and Badia regions, causing dust and dust agitation and a decrease in the horizontal visibility in those areas.

The numerical findings indicate that there is a generally weak chance of sporadic light showers of rain in the north of the Kingdom during the late night hours of Saturday / Sunday night and Sunday dawn due to the increase in the density and quantities of low clouds in the atmosphere.

Relatively cold and foggy nights in the mountainous heights

Night temperatures are expected to drop dramatically during the night of Saturday / Sunday and at night Sunday / Monday, which will work on the prevalence of relatively cold weather in the various regions of the Kingdom and the lowest temperatures in the capital Amman and many Jordanian cities are around 12 ° C, and the weather will be cold in The southern high mountain elevations, and temperatures are around 10 degrees Celsius in those areas.

1- Pay attention to the temperature differences between Thursday and Friday, and Saturday and Sunday.
2- Wearing warm coats during night hours, especially for children.
3- Driving cautiously on roads that witness an increase in the concentration of dust and the formation of fog.

Disruption of ministries, official departments, institutions and public bodies on Tuesday on the occasion of the Islamic New Year