Jordan: Monitoring the movement of a freezing polar air mass deepening into the region Tuesday 15-03-2022 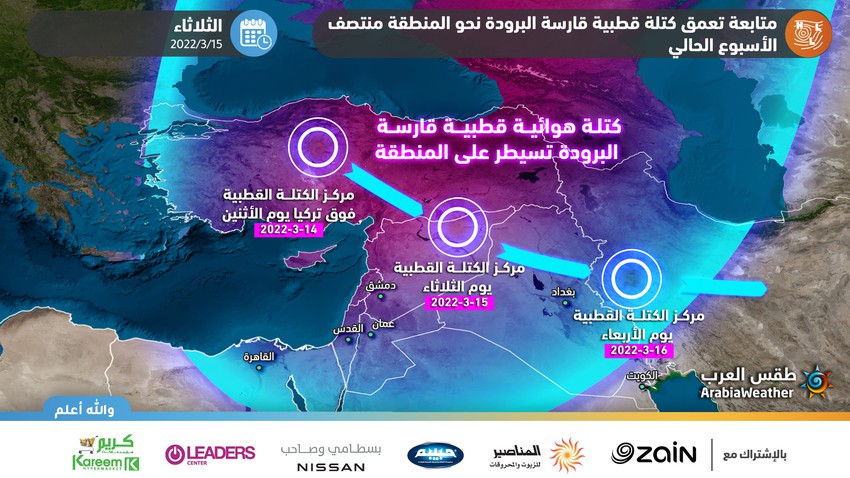 Arab Weather - Specialists at the Arab Regional Weather Center for Meteorology and Weather Forecasts are closely following the results of computer simulations of the movement of a very cold polar mass that is rushing directly to the region, accompanied by very low temperatures, next Tuesday 15-03-2022. It is expected that this frigid polar mass will follow a mostly continental path, meaning that it does not cross large bodies of water, which makes it maintain its frigid polar characteristics at the expense of weak specific moisture (mass of water vapor) accompanying the polar mass, as this mass is associated with high degrees Unusual heat for Turkey and the Levant in terms of cold at this time of the year.

The outputs of the computer numerical models developed in the Arab Weather Center , which sense the movements of air masses on the globe, indicate that this freezing air mass will move from Turkey to the Syrian Badia and continue to move towards Iraqi lands and thus will not cross large water bodies, for example, temperatures drop below average The usual in some areas that will affect them by more than 15 degrees Celsius, and this in itself gives them the character of freezing cold, especially since the effects of cold masses during this period of the year are more powerful compared to the month of January. 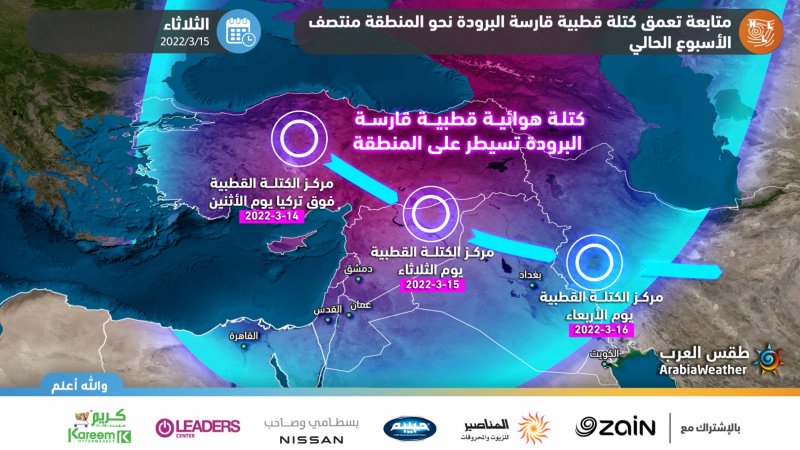 The movement of this polar air mass in this way and path means that this rush of cold air will be ineffective, meaning that the arrival of this polar air mass to these areas would impose on the Levant region a significant and significant drop in temperatures and the occurrence of frost and ice waves, as for snow The arrival of these polar air masses to the region requires more complex atmospheric systems to cause extensive snowfalls, including the descent of the polar mass into the water basin from the eastern Mediterranean so that an air depression is formed and the generator works for the occurrence of both rain and snow precipitation, but this possibility Weak, due to the small number of outputs that sense this path.

Weather forecasters say that the results of the developed technological system from the Arab weather , and according to the consequences of the path of this mass on Jordan, it is expected that the weather in the Kingdom will be on Tuesday 15-03-2022 as follows:

Operations management specialists at the Arab Weather Regional Center for Meteorology and Forecasting periodically review around the clock the outputs and analyzes of weather readings and issue updates if necessary, God willing.