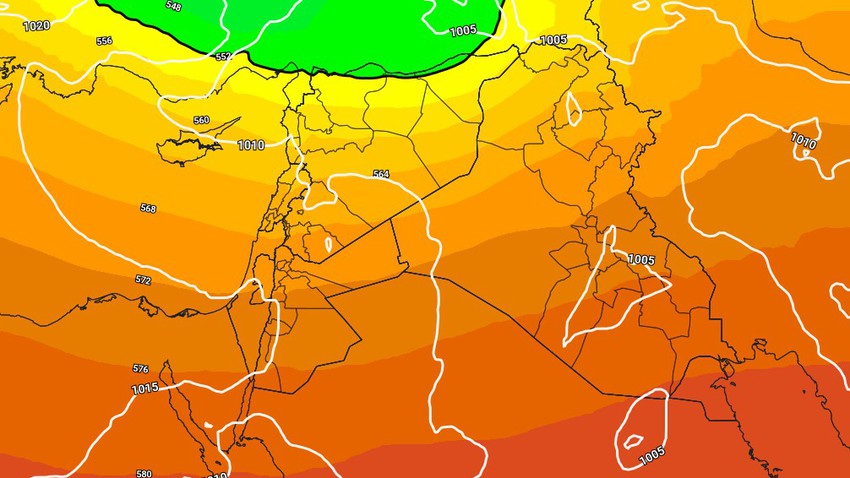 Arab Weather - The forecasts of the Air Operations Department at the Arab Regional Weather Center indicate a rush of southwestern air currents that raise temperatures during the morning hours of Friday, and the weather will be warm in most regions of the Kingdom and relatively hot in the Jordan Valley and Aqaba at the beginning of the day, but with hours In the afternoon and afternoon, the air currents become coming from the Mediterranean Sea, so there is a gradual decrease in temperatures in all western regions, but they remain higher than their rates for this time of the year, and the weather becomes moderate in the western regions, and hot in the Badia, Jordan Valley and Aqaba regions, with the emergence of large quantities of Large clouds at medium and high altitudes.

Temperatures will return to normal on Saturday

It is expected, God willing, that there will be a further decrease in temperatures during the day on Saturday in all regions of the Kingdom to be around slightly higher than their averages for this time of the year, and the weather will be cold and humid in the morning with the appearance of low clouds, turning into pleasant and sunny for the rest of the day in many From the regions of the Kingdom, while it is relatively hot in the Jordan Valley, the Dead Sea and the city of Aqaba.

Temperatures will return to a temporary rise on Sunday

On Sunday, temperatures rise again to be several degrees higher than their averages for this time of the year, and the weather tends to be cold in the morning, becoming generally warm during the afternoon and afternoon hours and relatively hot in the Jordan Valley, Aqaba and the Badia, and temperatures exceeding the mid-twenties Celsius in most regions of the Kingdom , while it was in the early thirties in the Jordan Valley, the Dead Sea, the city of Aqaba and parts of the Badia, with the spread of clouds at medium and high altitudes.

Temperatures drop clearly on Monday, and moderate weather is expected

According to the initial indicators, the temperatures drop again clearly on Monday, to return and become around their rates for this time of the year, and the weather will be cold in the morning, turning to mild for the rest of the day, and it remains relatively hot in the Jordan Valley, the Dead Sea and the city of Aqaba.

On Friday, strong southwesterly to westerly winds, active at intervals, will gradually blow in the south and east of the Kingdom, with a constant wind speed exceeding 50 km/h, accompanied by strong gusts of 90 km/h, which will form strong dust waves in the desert areas, especially in the afternoon and afternoon. Friday.

On Saturday, strong winds recede to become light to moderate in overall speed, sometimes active over some areas.

However, on Sunday and Monday, southeasterly to northwesterly moderate winds blow, energizing at times and causing dust and dust in desert areas, especially on Monday.

Relatively cold to cold nights over the coming days

A clear decrease in night temperatures occurs from Friday / Saturday night and during the coming nights, and the weather becomes relatively cold to cold in most regions of the Kingdom during the late night hours, especially over mountainous heights and plains, and the lowest temperatures are around 10 degrees Celsius in major cities, including the capital. Amman, which prepares the use of coats, while the weather is moderate in the Jordan Valley, the Dead Sea and the city of Aqaba, and temperatures are around the twenties Celsius in those areas.

Coinciding with a rise in surface humidity sometimes, low clouds appear during the night hours, especially over the northern and central regions.