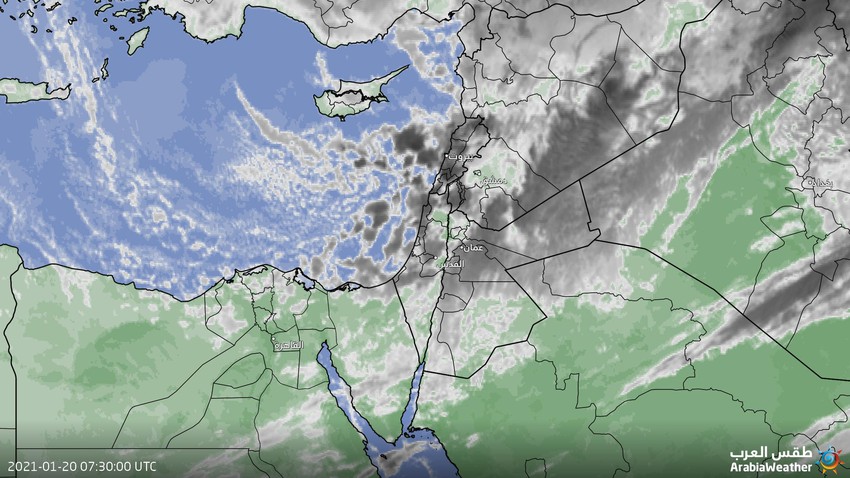 Arab Weather - Satellite images and meteorological stations indicate that the flow of polar winds accompanying the Class III air depression is now beginning, as the chances of snowfall and accumulation of snow over the high mountain heights increase, especially those that are more than 1200 meters above sea level and include the Suv and Ras heights Munif in the northern regions and the southern heights and Mu'ta in Karak, the Rashadiyah and Qadisiyah heights in Tafila,

It is also possible that some snow showers will extend during the coming hours for some periods to heights less than 1200 meters above sea level, with limited accumulation opportunities if they occur, and this includes some mountain heights in the capital and Balqa.

Snowfall and its accumulation are expected to gradually extend to the heights of Shobak, Al-Hisha, Wadi Musa, Mubarak, and the villages of Al-Naimat and Ras Al-Naqab in Ma'an. The chance of heavy snowfall still exists at intervals over the high mountains of Tafila (the Rashadiyah and Qadisiyah heights).

The weather today is cold in most regions and very cold over the high mountain heights, and often cloudy with rain, God willing, at intervals in the various regions of the Kingdom accompanied by the occurrence of thunder and showers of hail, as well as snow mixed with rain falling over the mountain heights sometimes.

Where there is a sharp drop in temperatures, and the weather turns to become extremely cold in many regions, with the opportunity remaining ready for showers of snow over the high mountain heights, especially the southern ones in the early hours of the night, and later during the night and gradually, a large-scale ice wave is expected. In large parts of the Kingdom.