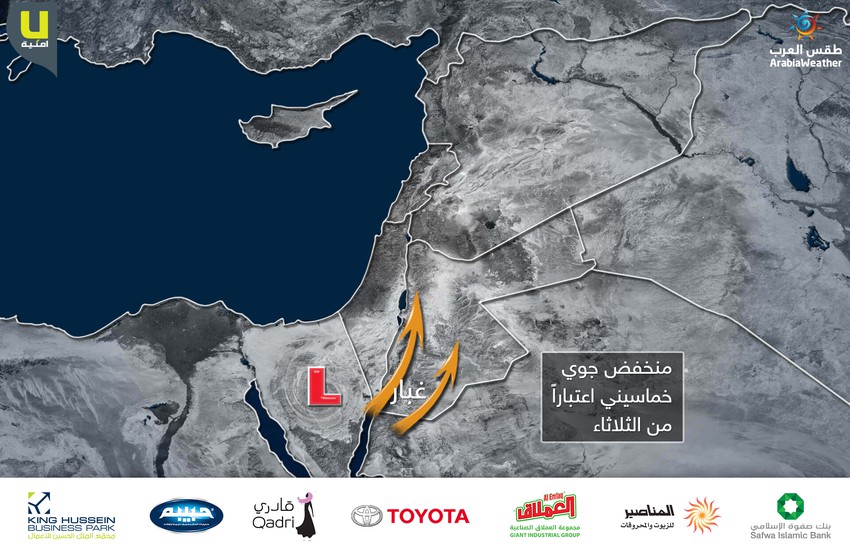 Weather of Arabia - The global weather maps issued Monday morning still indicate a five-day low depression of air movement during the hours of Tuesday morning towards the eastern basin of the Mediterranean coming from the Egyptian desert, and it will in turn work on many weather disturbances in the region.

Beginning with Tuesday, medium and high altitude clouds multiply in many regions, with some rain cells interspersed, as light showers of "muddy" rain may fall in separate and limited areas of the Kingdom, in conjunction with a rise in high temperatures to exceed the 20 ° C barrier In Amman and Jordanian cities.

Gradually during the afternoon and evening, the southwest wind, laden with quantities of dust and dust coming from the Egyptian desert, is activated and consequently, it is expected to increase the concentration of dust in the skies of the Kingdom.

With the night of Tuesday / Wednesday and Wednesday, the effect of the cold “crevice” starts from the low-pentagonal depression. Remarkable in the western wind.

Showers of rain, from light to medium intensity, are expected in the north and parts of the center of the kingdom, which may be accompanied by thunder sometimes.

The relatively cold weather persists on Thursday and Friday, but with a significant decrease in the wind speed of the west.

Temperatures are expected to resume their rise from next Saturday, to return and become within twenty levels in Amman and Jordanian cities.