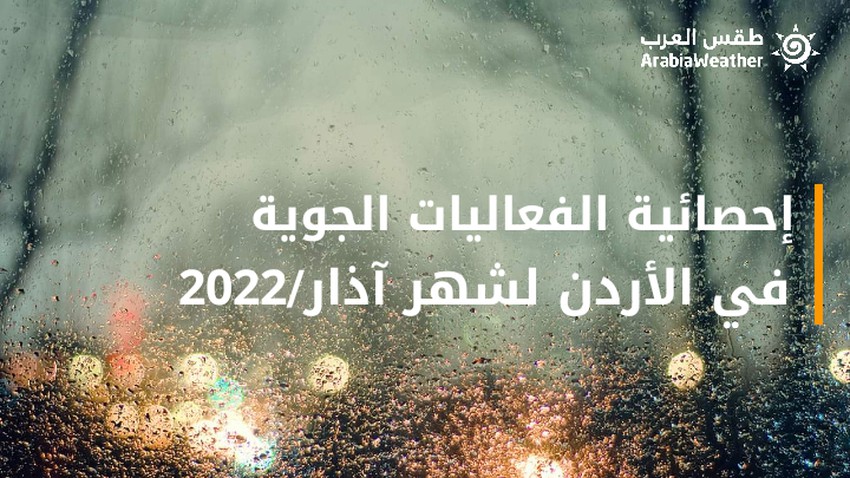 Arab weather - the month of March of 2022 ended with an atmosphere that can be described as unusual, as cold and polar air masses arrived in an unusual way, and temperatures were much lower than the rates they are supposed to be in all regions of the Kingdom, as rain and snow fell, and waves occurred Strong frost and freezing made March 2022 the coldest month in nearly 19 years.

The following is a summary of the weather events that affected the Kingdom during the month of March / 2022:

2-3/March/2022: a second-degree (normal) depression associated with a cold and wet air mass

At the beginning of March, the Kingdom was affected by a second-degree air depression accompanied by some strong weather phenomena, as there was a sharp drop in temperatures by more than 11 degrees Celsius, and cold weather prevailed during the day and very cold at night with the formation of frost, and showers of rain fell in the north and parts of the country. In the center of the Kingdom, the active westerly winds were the most distinct phenomenon during the depression, as the depression was accompanied by strong winds that reached a speed of 100 km/hour in many areas.

Which caused the formation of strong sandstorms in the south and east of the Kingdom, which led to a lack of horizontal visibility, which caused many accidents on desert roads.

During this period, the Kingdom was affected by a new second-degree depression, but it was accompanied by a very cold air mass, which caused a significant drop in temperatures and a cold to very cold canonical atmosphere prevailed. Strong thunderstorms for some time, and rain sometimes extended to parts of the southern region, and showers of snow fell over the northern heights whose height exceeded 1,100 meters, coinciding with strong westerly to southwesterly winds, accompanied by strong gusts that worked to fly lightweight objects. In addition to billboards.

It is worth noting that the depression was followed by a deepening of dry polar winds that led to a drop in temperatures at night to zero degrees Celsius with the occurrence of a strong and wide wave of frost that pervaded most regions of the Kingdom, including agricultural areas, and the extremely cold weather and temperatures close to zero Celsius continued at night for several days after the air depression.

Despite the middle of March, a polar air mass of very cold origin was able to dominate the Kingdom as a rare and unusual weather event, but it crossed a semi-continental path and coincided with the rush of humid northwestern air currents, and the polar air mass caused frigid weather, where it did not exceed degrees The maximum temperature in the capital Amman was 5 degrees Celsius, and showers of rain and hail fell on different areas and the northwest winds activated, and intermittent showers of snow fell over many mountainous heights, including the north, central and southern regions of the Kingdom, in addition to the eastern regions, the snow was accumulating in some areas to a limited extent. .

Temperatures decreased at night during the impact of the polar air mass below zero centigrade in a number of regions of the Kingdom, including the main cities and the capital Amman, and a strong wave of frost formed and freezing occurred on wet roads and water gatherings on roadsides. It is noteworthy that the Shobak monitoring station recorded record temperatures. It reached minus 5 degrees Celsius.

3/21/2022 A weak and polar case of atmospheric instability

During that period, the Kingdom was affected by a polar state of atmospheric instability, but it was generally weak in effectiveness, which led to showers of freezing rain that were concentrated in the far northern regions, and light, ineffective showers of snow fell in areas that rarely witness snowfalls, such as Irbid and Al-Ramtha Brigade.

Despite the start of the spring equinox, a very cold air mass deepened into the Kingdom again, forming an unusually third-degree air depression. Sometimes it extended to the southern regions, and snow showers fell over the northern and central mountain heights, whose height exceeded 1,000 meters, in addition to the parts of the Shara Mountains. Regions.

On 13 nights of the month, temperatures hovered below zero degrees Celsius

After conducting an extensive study, it was found that 13 nights of March nights recorded temperatures that were about below zero degrees Celsius in many areas, including the capital, Amman, and frost formation was repeated in most of these nights continuously, and freezing occurred several times on wet roads and water gatherings. 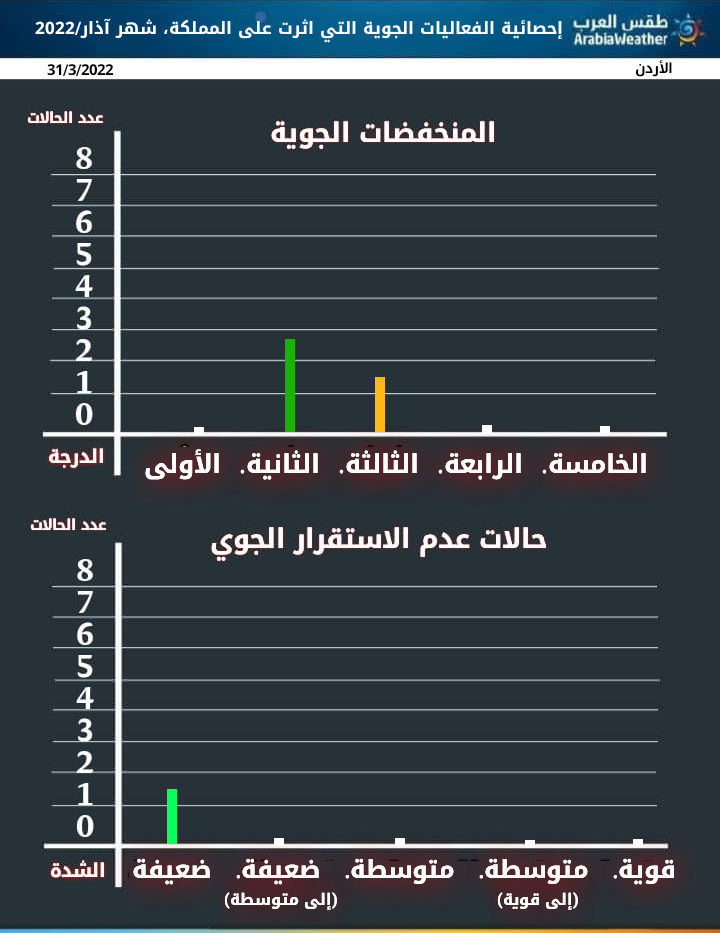 Number of depressions by degree:


Number of cases of atmospheric instability by severity: