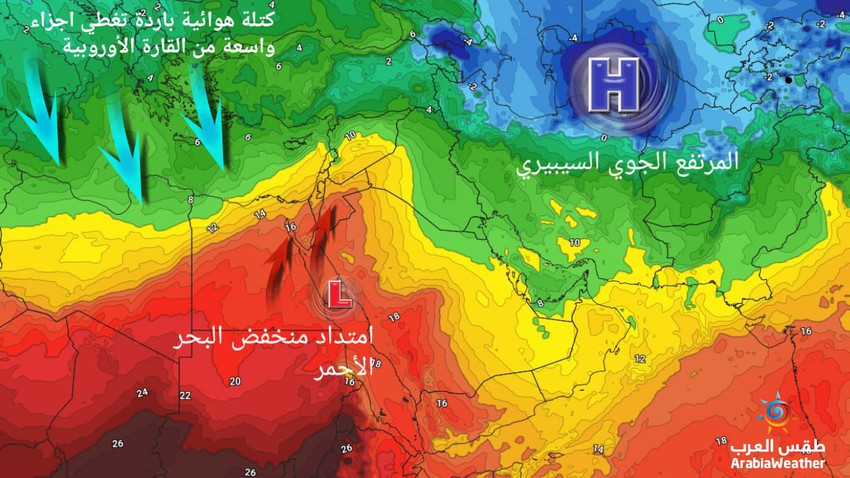 Arab Weather - The journey to rise in temperatures begins on Friday, and a cold weather prevails during the day as a result of the increase in the speed of the eastern winds, and the weather is often clear in most regions of the Kingdom and ranges between 16/18 degrees Celsius in most Jordanian cities, but it is twenty in The Jordan Valley and the Dead Sea, and the weather remains generally cold at night.

Temperatures approaching twenty degrees Celsius in most regions of the Kingdom on Saturday!

On Saturday, the Kingdom will be affected by a surface extension of the Red Sea Depression, which is associated with a warmer air mass, which will raise temperatures significantly throughout the Kingdom's regions, and the maximum temperatures on Saturday approach the 30 degrees Celsius barrier in the Jordan Valley and the Dead Sea and are around 20 A slightly lower degree to a little higher in the rest of the regions, with the appearance of medium clouds and the continued blowing of the easterly winds.

What is the reason for the high temperatures during the beginning of the week?

The reason for the high temperatures during the beginning of the week is the extension of the Red Sea depression from the south, accompanied by a hotter air mass, due to the eruption of a cold air mass over large parts of the European continent, especially its western and central regions, reaching the north of the Libyan territories and northwestern Egypt.