Jordan | Temperatures drop on Thursday and Friday, warning of an increased chance of catching a cold as a result of the temperature differences between day and night 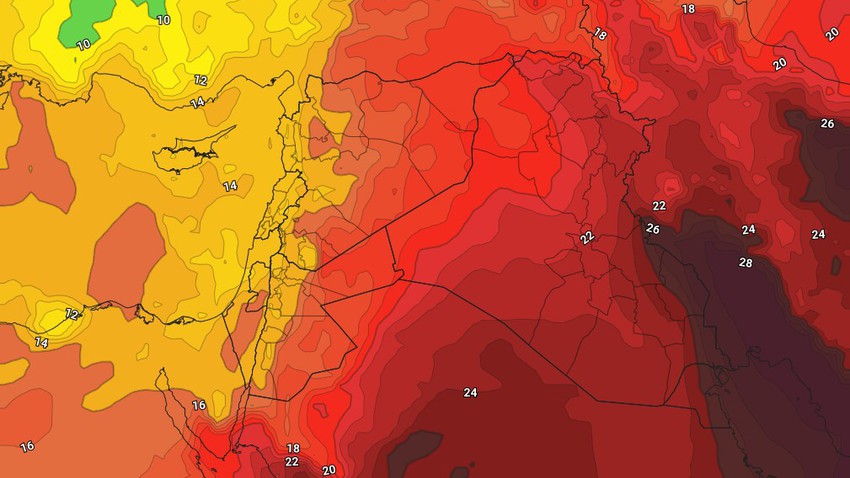 Arab weather - the latest outputs of the numerical models indicate the return of temperatures to decrease as of Thursday, to become lower than their rates for this time of the year, and the weather will be mild summer in the mountainous heights, relatively hot in the Jordan Valley, the Dead Sea and the city of Aqaba in addition to parts of the Badia, With the spread of quantities of low clouds and medium clouds, so that the weather will be partly cloudy in some areas and periods.

A slight rise in temperatures on Friday, while remaining below their rates

There is a slight rise in temperatures on Friday, while they remain below their rates for this time of the year. The weather is mild summer in the mountainous heights, relatively hot in the Jordan Valley, the Dead Sea and the city of Aqaba, in addition to parts of the desert, with the appearance of low clouds and medium clouds, especially in the areas Northern and Central of the Kingdom.

God willing, night temperatures are expected to decrease from Thursday/Friday night and during Friday/Saturday night, so that the weather at night turns from cold to relatively cold in many areas, especially in mountainous heights and plain areas.

There is a noticeable rise in the surface humidity levels to exceed 95% in some regions of the Kingdom, so that large amounts of low clouds appear at night, leading to the formation of fog at the tops of the northern, central and southern mountainous heights, in addition to a measure from the eastern plains, and opportunities for fog formation include the eastern plains, It is not excluded that the fog is sometimes thick, causing a decrease in the range of horizontal visibility, especially in the late night hours and early morning.

The northwest winds will continue to blow over the Kingdom on Thursday and Friday, and they will generally be moderate in speed, sometimes active over some areas and cause dust and dust in the desert and open areas.

• Pay attention to the temperature differences between day and night, which result in increased chances of catching colds and colds.

• To be aware of the danger of low horizontal visibility due to fog in mountainous peaks and plain areas.

• It is advisable to wear a light coat when leaving the house in the late hours of the night, especially for residents of mountainous heights.