Arab weather - temperatures remain slightly higher than their usual rates in the Kingdom on Wednesday, so that the weather is moderate in most areas, and hot in the Badia, the Jordan Valley, the Bahramit and Aqaba, and scattered clouds appear at medium altitudes that may cause showers of rain in limited parts of southern In the east of the Kingdom, the winds will be northwesterly moderate in general. While the weather is nice at night, and tends to get cold in some areas with the hours of late night and early morning.

Forecasters at the Arab Weather Regional Center said that a strong air surge is expected in the coming days over important areas in the European continent, extending from the Iberian Peninsula (Spain and Portugal) to large areas in the southwest and central European continent, and it is expected that a mass of Relatively cold air around this height directly towards the Balkans and southeastern European continent, and then - after losing its cold characteristics - heading to the eastern basin of the Mediterranean, including the Kingdom, and arriving in the form of a "humid and nice-temperature air mass" during this weekend God willing. 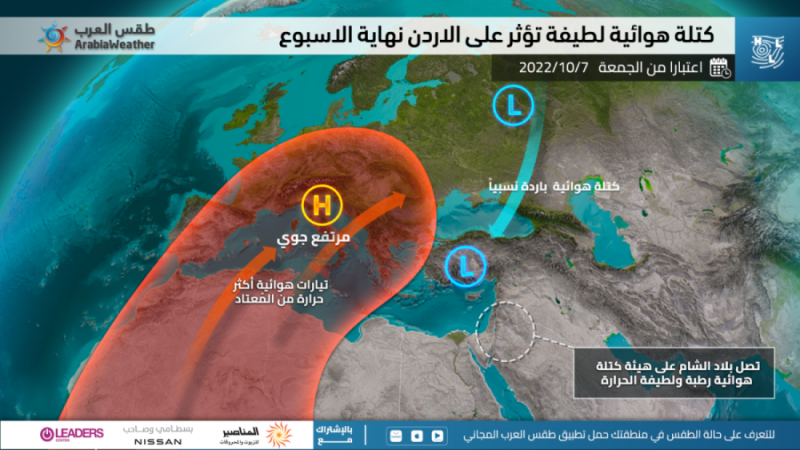 As a result, there is a significant decrease in temperatures starting from the evening hours and nights of Thursday / Friday and during the weekend, so that it is lower than its usual rates for this time of the year by several degrees, in addition to the pleasant weather during the day expected in the mountains, where the greatest is between the beginning of In the mid-twenties Celsius, the weather at night is expected to change from being nice (these days) to relatively cold and humid in most areas, with the appearance of low clouds in many areas.