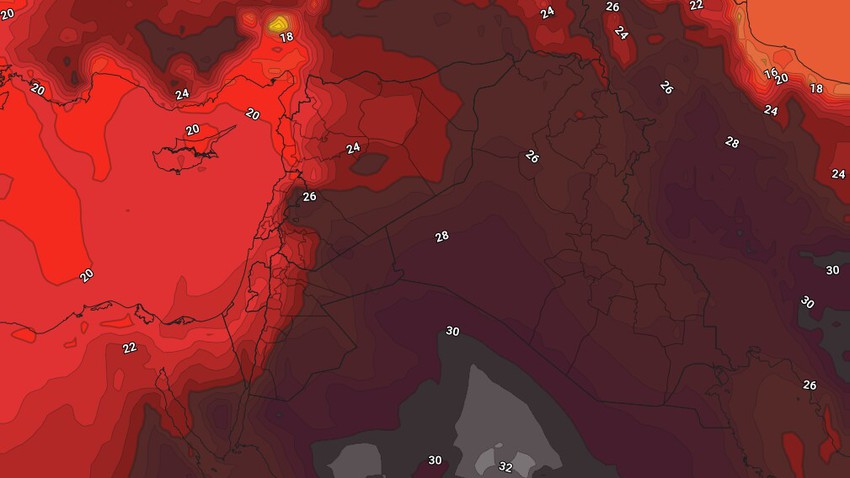 Arab Weather - There is a significant rise in temperatures in Jordan on Tuesday, to become slightly higher than their rates for such a time of the year, and the weather is warm in the high mountain heights, and relatively hot in the rest of the regions, and hot in the Jordan Valley, the Dead Sea and Aqaba, and the winds are volatile and light Speed, it turns into northwest moderately fast and is accompanied by active flashes during the afternoon and afternoon hours, and nighttime temperatures rise compared to previous nights and the weather is generally pleasant, tending to cooler in the late evening hours in some areas.

An additional rise in temperatures in Jordan on Wednesday and Thursday

God willing, it is expected that the temperature will increase in the Kingdom during Wednesday and Thursday, and the weather will be relatively hot in all regions, and hot to very hot in the Jordan Valley, the Dead Sea, Aqaba and some parts of the eastern desert, and the temperatures will be higher than their average for this time of year.

It is expected that high temperatures in Jordan during the coming days will be accompanied by daily activity at the speed of the northwest winds, sometimes during the hours between noon and afternoon, but with less intensity than the previous days.

Nice nights are back, starting Wednesday

Jordan | The effect of the humid western air currents deepened on Saturday, and an opportunity for local showers of rain in the northwest of the Kingdom