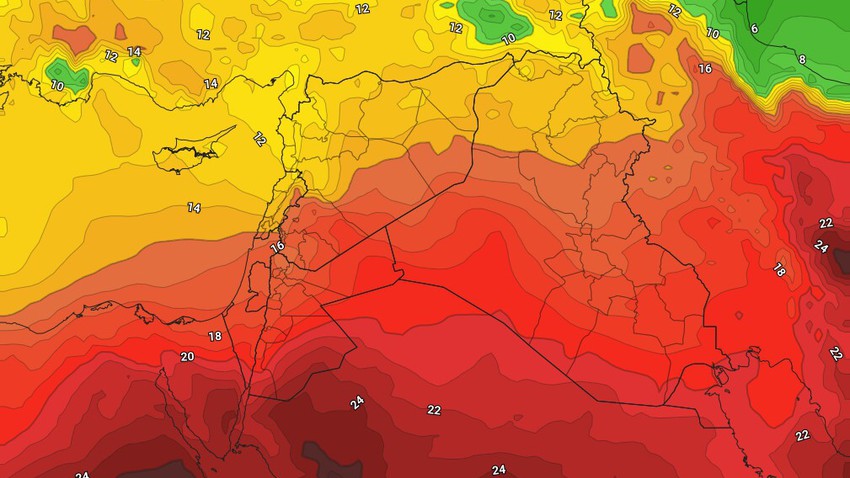 Arab weather - God willing, according to the weather maps in the Arab Weather Center, it is expected that there will be a rise in temperatures from Sunday, but they remain lower than their rates for this time of the year, and the weather will be relatively cold in the morning, turning into pleasant to moderate during noon and afternoon hours in most regions And relatively hot in the Jordan Valley, the Dead Sea and the city of Aqaba, with the appearance of some clouds at medium and high altitudes.

The rise becomes noticeable on Monday and Tuesday

The rise in temperatures increases on Monday and Tuesday to become noticeable so that the temperatures are around their usual rates for this time of the year, and the weather is warm in the afternoon and afternoon hours in various regions of the Kingdom, while it is hot in the Jordan Valley, the Dead Sea and the city of Aqaba with the spread of clouds at medium and high altitudes. .

Westerly winds will continue to blow in the coming days

Westerly winds will continue to blow from northwest to moderate speed during the coming days. They are active in the afternoon and afternoon hours, especially in the eastern regions, and they are dusty and dusty in the desert regions when active.

Night temperatures tend to rise during the coming days compared to what they were previously, and the weather becomes pleasant with the early evening and night hours, but it will tend to be cold at the late night hours and early morning, especially in the high mountainous heights and the plain areas.