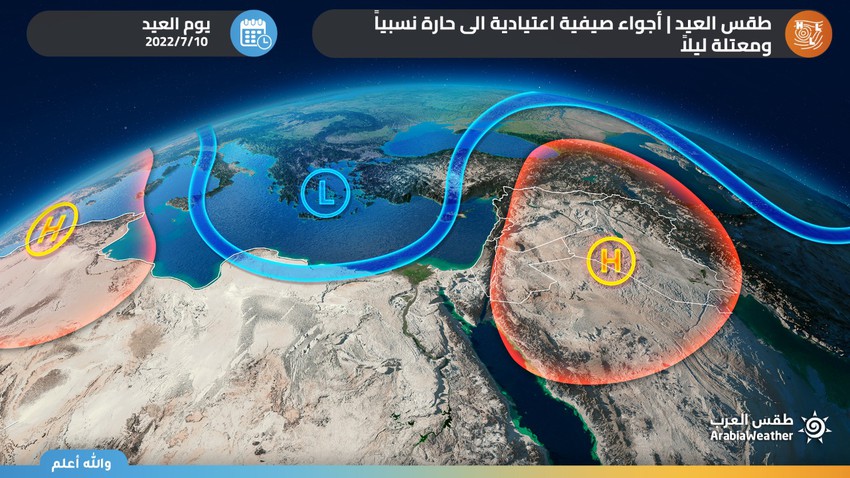 Arab weather - the outputs of the weather maps in the Arab Regional Weather Center indicate an increase in temperatures on Friday (Arafat Day) and during the first day of the blessed Eid al-Adha, which falls on Saturday, and the weather is normal summer over high mountainous heights, and relatively hot in the rest of the regions, While it is hot to very hot in the Jordan Valley, the Dead Sea and the city of Aqaba.

The maximum temperatures during the Day of Arafat and the first days of Eid al-Adha touch 40 degrees Celsius in the Jordan Valley, the Dead Sea and the city of Aqaba, in addition to the eastern Badia regions, while it is between the early and mid-30s Celsius in the rest of the Kingdom’s regions.

According to the initial indicators, temperatures are expected to drop on Sunday and Monday (the second and third days of Eid) to become slightly below their average rates for this time of the year, and the weather will be normal summer over many areas, and hot in the Jordan Valley, Aqaba and desert areas.

On the day of Arafa and during Eid, moderate-speed northwest winds will blow over the Kingdom, gradually active in the afternoon and evening periods, accompanied by strong gifts in the mountainous and open areas, working to raise dust and dust locally in the south and east of the Kingdom, including parts of the desert road and Baghdad International Road.