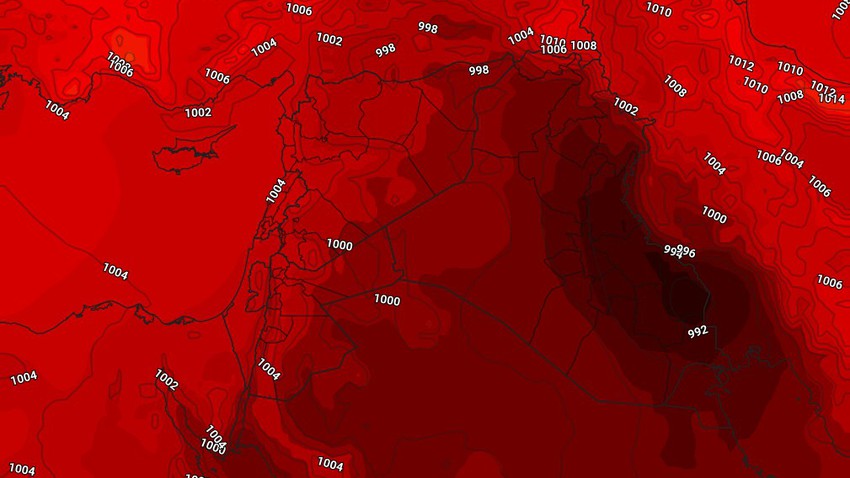 Weather of Arabia - The outputs of computer models for the distribution of air masses in the layers of the atmosphere near the surface of the earth indicate that the Kingdom will continue to be affected on Sunday by moderately hot air currents coming from the Mediterranean, where temperatures remain slightly below their rates for this time of the year, and moderate weather prevails to Normal summer during the day and nice and refreshing at night (it tends to be cold in some areas of the mountains and plains), with the appearance of low clouds and the activity of northwesterly winds at intervals.

However, according to the same outputs, temperatures begin to gradually rise from Monday to become around their rates for this time of the year, and the weather is normal summer in various cities and regions of the Kingdom, and hot in the Jordan Valley, the Dead Sea and the city of Aqaba.

The rise in temperatures increases on Tuesday and during the rest of the week to be slightly higher than their averages for this time of the year, as the weather is normal summer in the mountainous heights, and relatively hot in the rest of the regions, but it is hot in the Jordan Valley and desert areas.

In conjunction with the appearance of clouds at medium and high altitudes, especially in the south and east of the Kingdom, with the possibility of local showers of rain in parts of the Badia regions, accompanied by the activity of dusty surface winds.

There is a decline in the influence of the northwest wind, which becomes light to moderate in speed, sometimes active in some areas during the afternoon and evening periods.

The night temperatures are rising and the weather is nice

Night temperatures tend to rise in the middle and end of the week, but the weather is nice to moderate, especially in the high mountainous heights and the eastern plains areas, and the surface humidity levels gradually rise with the appearance of low clouds, especially in the northern regions of the Kingdom.