Jordan | The detailed design ... the details of the expected depression in the coming hours 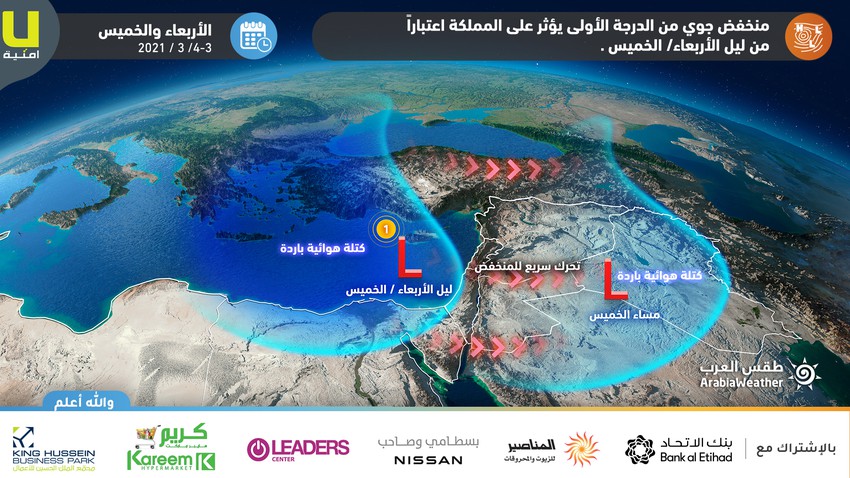 Arab Weather - During the coming hours, specifically with the first night hours of Wednesday / Thursday, the Kingdom begins to be affected by an air depression that has been classified as first class, which is the weakest degree according to the Arab Weather Scale to measure the severity of the depressions, and this depression is accompanied by several weather phenomena that we review With the following design:

The depression is fast moving and impactful

The impact of the depression begins on the night of Wednesday / Thursday, and the rains begin to rain in most regions of the Kingdom in conjunction with a significant decrease in temperatures, but with the crossing of the center of the depression and the most effective part therein on Thursday morning, the rainfalls become witnessing some abundance with opportunities for showers of cold Especially in the northern, central and eastern parts of the Kingdom, while snow showers over the high mountain peaks whose altitude ranges between 1,200 and 1,300 meters, including the Al-Sharrah Mountains in the south of the Kingdom, are not excluded in the form of rain mixed with snow over mountain heights with slightly lower elevations.

The impact of the depression decreased on Thursday evening

As we mentioned, the expected air depression will be fast moving and affecting, and it moves away quickly from the Kingdom on Thursday evening and its effects and opportunities for rain will decrease in all regions, with the exception of the far east of the Kingdom, where its opportunities will continue until the late night hours of Thursday / Friday night before the weather is completely stable on the day Friday.

ArabiaWeather recommends, during the period affected by this depression in the Kingdom, the following: