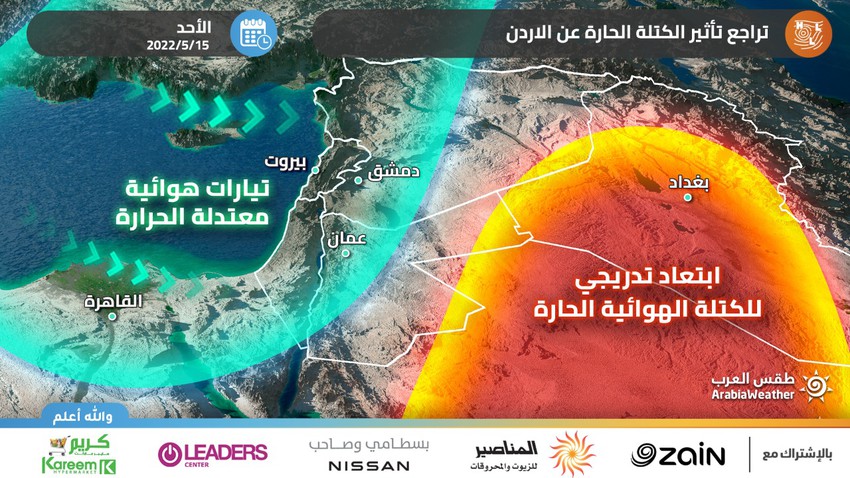 Arab weather - God willing, it is expected that the effect of the hot air mass will decline from the Kingdom on Sunday as a result of the rush of moderate-temperature marine air currents, so there will be a significant decrease in temperatures on Sunday to become less than their rates for this time of the year, and the weather is thermally moderate during the noon hours. The afternoon is in different regions of the Kingdom, while it is relatively hot in the Jordan Valley, the Dead Sea, the city of Aqaba and the Badia regions, with the emergence and scattering of clouds at different altitudes and there is a weak possibility of local showers of rain over limited parts in the morning.

Winds will be northwesterly moderate in speed, gradually becoming active during the afternoon and afternoon hours, especially in the south and east of the Kingdom, and they are accompanied by strong gifts that raise dust and dust in the desert areas, and may work to form dust waves.

There is a significant decrease in night temperatures compared to the previous nights, and the weather tends to be cold at the beginning of the night, turning to relatively cold at late night hours and early morning in various regions of the Kingdom, which requires wearing a light coat.

The winds are northwesterly, moderate in speed, active at times, especially at the beginning of the night, and they raise dust and dust in the southern and eastern regions.