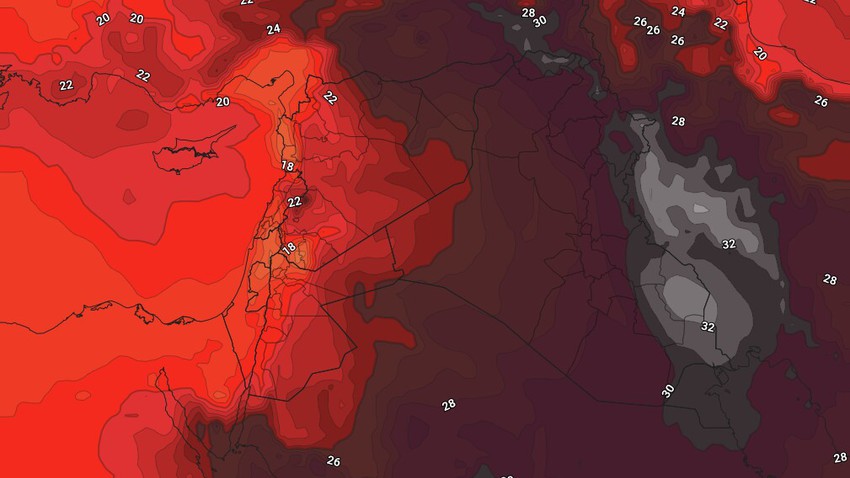 Arab Weather - Weather maps are still in the Arab Regional Weather Center until the Kingdom continues to be affected at the end of this week and the beginning of next week by moderate air currents coming across the Mediterranean Sea, where temperatures remain around slightly less than their rates for this time of year, and the weather is moderate in The high mountainous heights, and normal summer in the rest of the regions, coinciding with the appearance of low clouds at intervals, while the weather remains hot in the Jordan Valley, Aqaba and desert areas, and the winds are northwesterly moderate speed, active at intervals and accompanied by strong gifts in the afternoon and evening that raise dust in the desert areas.

The weather during the coming nights will be pleasant in several regions of the Kingdom, but it will tend to be a little cold at the late night hours in some regions of the mountains and eastern plains, coinciding with a gradual and noticeable rise in humidity, so that the weather becomes very humid, as quantities of low clouds appear, which may result From it, fog formed in parts of the mountainous heights and the plain areas, especially in the north.

Temperatures around the 30s Celsius

Maximum temperatures remain around the thirties Celsius in the mountainous heights and major cities, and may exceed that in some cities and neighborhoods, including east of the capital Amman, while temperatures exceed the mid-thirties in the Jordan Valley, Aqaba and desert areas.