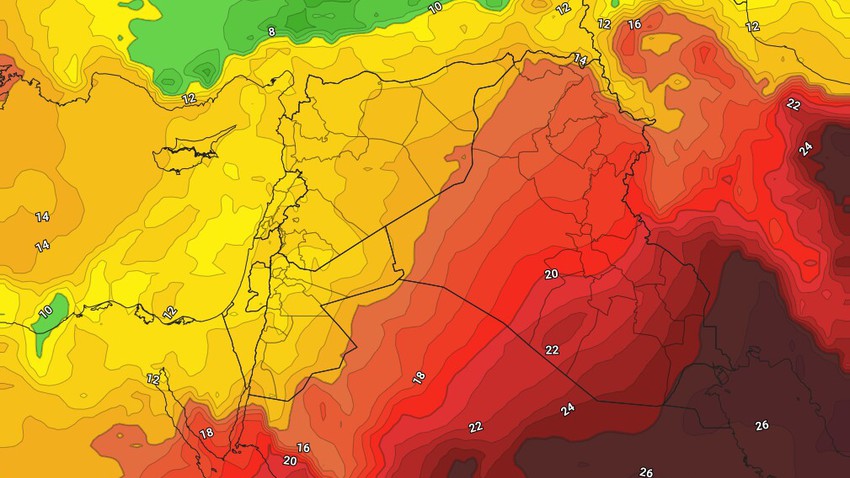 The Kingdom’s impact on the first-degree air depression begins on Thursday in the form of a significant drop in temperatures so that the temperatures are lower than their averages for this time of the year, so that the autumn weather is humid and mild in the mountainous heights, relatively hot in the Jordan Valley, the Dead Sea and the city of Aqaba, with Low clouds appear.

The blowing and activity of the northwest wind gradually increases during daylight hours, to be moderate to active, accompanied by strong gusts that touch the 60 km/h barrier in parts of the Kingdom, working to raise dust and dust in desert areas.

It is expected, God willing, that the impact of the depression on the Kingdom will increase during the evening and night hours, so that the night temperatures will decrease compared to the previous nights, and the weather will be relatively cold in most regions of the Kingdom, with a significant increase in surface humidity levels.

Amounts of medium and low clouds appear, and showers of rain gradually fall during the late night and dawn hours on the western parts of the north and center of the Kingdom, in addition to parts of the peaks of the Shara Mountains. Narrow and temporary periods, working on the flow of valleys and the occurrence of some water gatherings, and may be accompanied by the occurrence of thunder sometimes.

With the formation of fog over the high mountainous heights as a result of crossing the low clouds and touching the surface of the earth.

On Friday, the Kingdom is more affected by the air mass with temperatures lower than what is usual, so that the temperatures drop further to be much lower than their rates for this time of the year, and the weather is wet and cold in the mountainous heights, relatively hot in the Jordan Valley, the Dead Sea and the city of obstacle.

Amounts of medium and low clouds appear, and showers of rain fall on parts of the north, center and south of the Kingdom. The rains are of varying intensity, and sometimes heavy in narrow geographical ranges, especially in the early morning hours. to the surface of the earth, and may be accompanied by the occurrence of thunder sometimes.

With moderate to brisk westerly winds, sometimes accompanied by strong flashes that cause dust and dust in desert areas.

The temperatures drop significantly during the Friday/Saturday night hours, and relatively cold to cold weather prevails, with a significant increase in humidity and fog formation in the mountainous heights and the eastern plains.