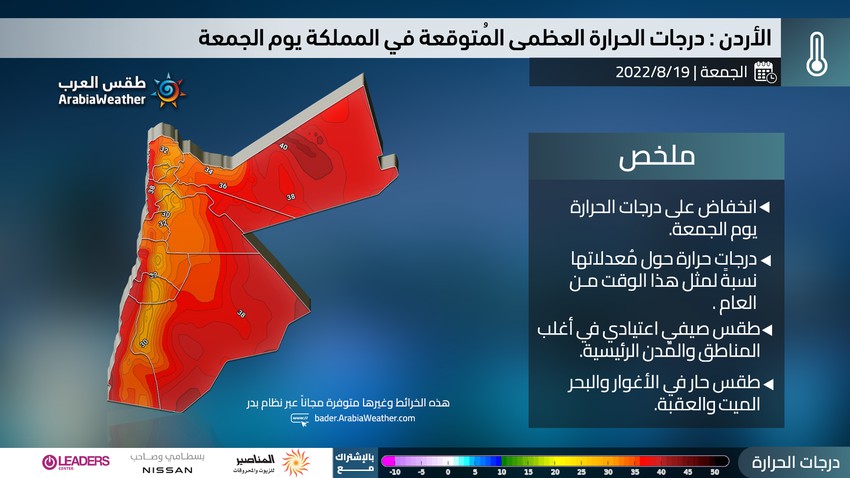 Arab Weather - Weather maps show through the developed Badr system from "Arab Weather" to expectations that the relatively hot air mass will decrease in Jordan on Friday and Saturday, as temperatures drop and the atmosphere turns into a normal summer in most regions and major cities in the Kingdom.

In the details, temperatures drop in all regions of the Kingdom on Friday to become around their usual rates for this time of the year, God willing, and a normal summer atmosphere prevails in various regions that tend to be slightly hot in the afternoon hours, while it is hot in the Jordan Valley, Dead Sea, Aqaba and desert areas The winds will be northwesterly moderate in speed, active at times, especially in the afternoon and evening hours. 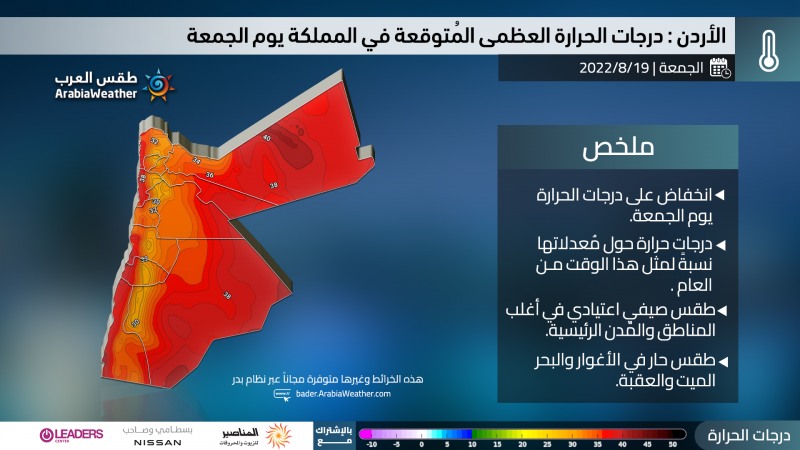 As for the night hours, it is expected that the weather will be mild to nice and humid in general in the mountains and plains, and some low clouds will appear in the morning in the north of the Kingdom, while the winds will be northwesterly moderate, sometimes active and the atmosphere is ideal for outdoor sessions and activities.

In a related context, it does not seem to the specialized forecasters inside the corridors of "Arab Weather" that the hot weather is close to the region, but on the contrary, the temperatures will generally be around their daily rates and perhaps lower on many days during the next week, so that the Kingdom and the rest of the Eastern Basin region will remain The Mediterranean Sea is under the influence of northwestern currents with temperatures within their usual rates, with no indications of the extension of the air heights in the upper layers of the atmosphere towards the region as the surrounding weather conditions are not prepared for that.